Prassthanam actor Satyajeet Dubey, who recently revealed that his 54-year-old mother was tested positive for COVID-19. He thanks all front liners for their help

Prassthanam actor Satyajeet Dubey recently revealed that his 54-year-old mother was tested positive for COVID-19. The actor took to Instagram to break the news about his mother’s health. He revealed that nearly a week ago his mother, who suffers from migraine, had a high fever, followed by shivering, vomiting, and body ache. He said that when he took her to get her normal tests done, he was advised to get her tested first for coronavirus. Satyajeet Dubey also revealed that his mother has currently been kept in isolation at Nanavati Hospital.

Satyajeet Dubey also revealed through the Instagram post that he and his sister are in constant touch with her through phone and video calls and she also sounds joyful. He also went on to thank the society and neighbours who have been great mental support for them. He added saying that he never imagined that a pandemic can bring them this close to being human.

He also went on to thank his friends and neighbours for their support and also for the frontline workers such as ‘the BMC, the brave corona warriors and the amazing doctors for all their love and support. He also revealed that he got a call from the local police station where he was told not to worry as everything will be fine. Check out the post here.

Seeing the post, Satyajit’s colleagues and friends from the industry and also fans sent their love and support to the actor and his mom. Celebs such as Richa Chaddha, Nupur Sanon, Natasha Bharadwaj wrote some kind and happy wishes to the actor. Some of the fans also wrote, “Oh Satya..... hope mum gets better soon... that’s wonderful you have support by a cop. Send you positive vibes during this time,” “Sending lots of love and prayers your way,” and many more. Check out a few more comments below. 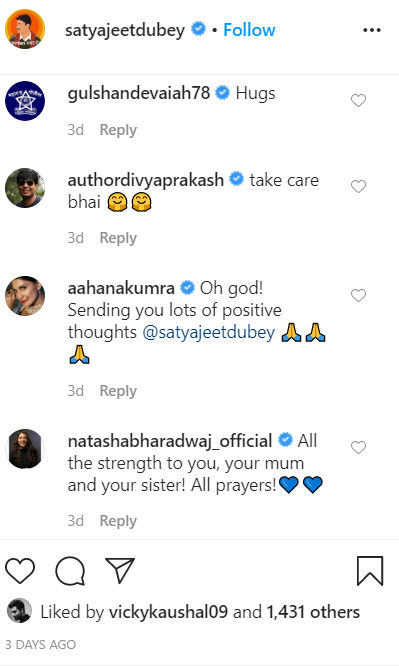 In a conversation with a news portal, Satyajeet Dubey accepted that he was fortunate enough to get a bed for his mother in a hospital. He revealed that as a son, he wanted to give his mother the best in terms of comfort. He also added saying that if one goes through the normal channel, it is nearly impossible to find a bed in hospitals. Satyajeet Dubey revealed that he had to pull some strings to get help and people were kind enough to help and also told him not to stress.

Also read | 'Prassthanam' To 'Panipat': Times When Sanjay Dutt Nailed His Looks In His Movies

Also read | Prassthanam "is Not An Exact Copy" Of The Telugu Film. Read Details

PEOPLE HAVE PLEDGED SO FAR
LATEST NEWS
View all
1 hour ago
Unseen Pic of the Day: Raj Kapoor & Vyjayanthimala’s adorable pic from 'Sangam' sets
1 hour ago
Aishwarya Rai or Sonam Kapoor, whose chemistry with Salman Khan impressed fans?
1 hour ago
Sonakshi Sinha’s movies that didn’t do well at the box office
56 mins ago
Ilaiyaraaja's top music compositions in Bollywood that fans must listen
1 hour ago
Anushka Sharma glows in sun-kissed pic; says 'I know all sunlight spots of my home'