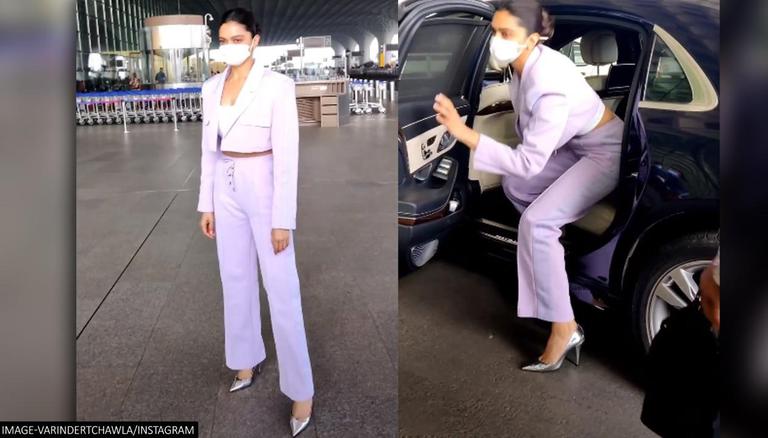 
Deepika Padukone is all set to share screen space with Prabhas and Amitabh Bachchan in Nag Ashwin's tentatively titled pan India film, Project K, which has been making headlines ever since it was announced. The film, which has faced several postponements owing to the COVID-19 pandemic, is being teased as a sci-fi adventure and will be one of the most expensive Indian films of all time.

Deepika Padukone was recently spotted jetting off to Hyderbad to join the team of the multi-lingual on the lavish sets constructed at the Ramoji Filmcity. The actor, who's currently living out of her suitcase owing to the intense filming schedules looked every bit regal in the lavender-coloured pant-suit as paps clicked her at the airport.

The Chennai Express star was clad in a cropped blazer and a white crop top, which she paired with jogger-style pants. She opted for a sleek bun and silver heels to accentuate her outfit. Take a look.

Deepika is set to shoot the first schedule of the magnum opus, post which she will return back to Mumbai to complete the dub for Shakun Batra's film and adhere to her other brand commitments. According to earlier reports by Pinkvilla, the film's first schedule commenced sometime in October. The apocalyptic film is reportedly set in the future, where the lead characters fight for survival. The film will release in the first half of 2023.

In an earlier response to fans' speculation surrounding the project, Nag revealed that any update will be posted only after Prabhas' Radhe Shyam release. Earlier this year, Deepika marked the film's beginning by uploading a photo with Project K written on it. She also expressed excitement about being part of the pan-India film.

Meanwhile, Padukone will also be seen in Ranveer Singh's 83, where she plays the role of his on-screen wife Romi Dev. She also has The Intern and Fighter in her pipeline.