R Madhavan Shuts Down Bigoted 'why A Cross In Prayer Room?' Question, Schools Netizen On Everything They Missed

R Madhavan recently slammed an eagle-eyed netizen who questioned the actor on why a 'cross was spotted in his prayer room'. For the uninitiated, the actor is a practicing Hindu.

R Madhavan recently slammed an eagle-eyed netizen who questioned the actor on why a 'cross was spotted in his prayer room'. For the uninitiated, the actor is a practicing Hindu. "I really don't worry about respect from the likes of you. I hope you get well soon. Surprised that in your sickness you did not see the Golden temple picture there too and asked if I converted to Sikhism", read an excerpt from his post.  He then went on to say that he has blessings from Dargas and all other religious places, some of which are gifted and some of which are bought. "My home is home to staff from all faiths and we pray at a common altar. Like any defense personal will tell you, it happens at every unit", his statement read.

Concluding he said, that from his childhood he has always been taught to respect each and every faith, belief and religion and that he has visited a Darga, Gurudwara and Church when a temple was not around. "All I have is a lot of love and respect to give as my vast travels and experience ahs proven is only true faith", the statement ended.

Read his statement below: 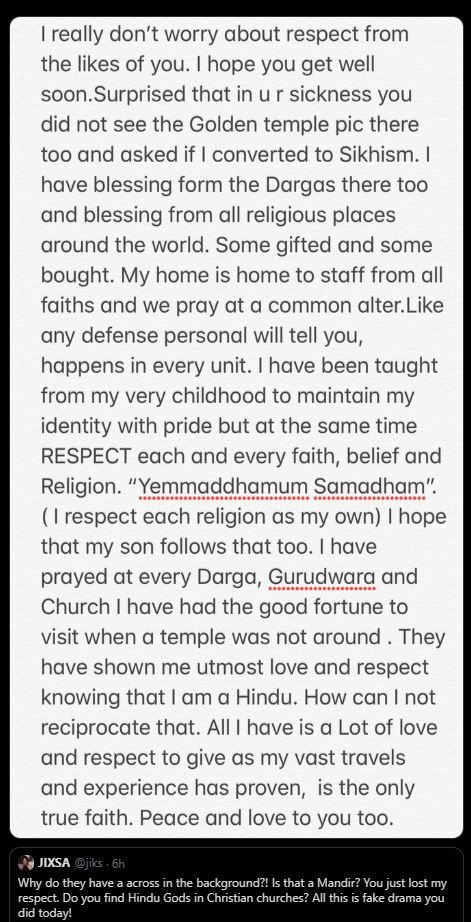 The picture was taken during the Rakhi celebrations, However, R Madhavan in his tweet informed that Avani Avittam, a ritual among Brahmins, is celebrated on the same day. The actor and his family expressed wishes to his fans for the triple celebration, which also included his son tying the Rakhi to him. The reason why the father-son were seen with only the sacred thread on their upper body is that they conducted the rituals for Avani Avittam, a traditional practice honoured among Brahmins.

Wish you all a very happy INDEPENDENCE DAY, RAKSHA BANDHAN AND AVANI AVITTAM. Prayers for peace and prosperity for ALL in this world continues.

ON THE WORK FRONT :

Meanwhile, on the professional front, Madhavan last featured in a cameo in his 'Tanu Weds Manu' director Aanand L Rai's 'Zero'. He is currently working on ‘Rocketry: The Nambi Effect’, based on the story of former Indian Space Research Orgnisation scientist Nambi Narayanan, where he is not the actor, but also the director, producer and writer. The actor had made headlines for the resemblance with Narayanan.