R Madhavan Starts Shooting For A Trilingual Movie, 'feels Great To Be Back On Floors'

Taking to Instagram, R Madhavan recently dropped in a glimpse of himself from the sets of his upcoming movie set and received tons of praise from his fans. 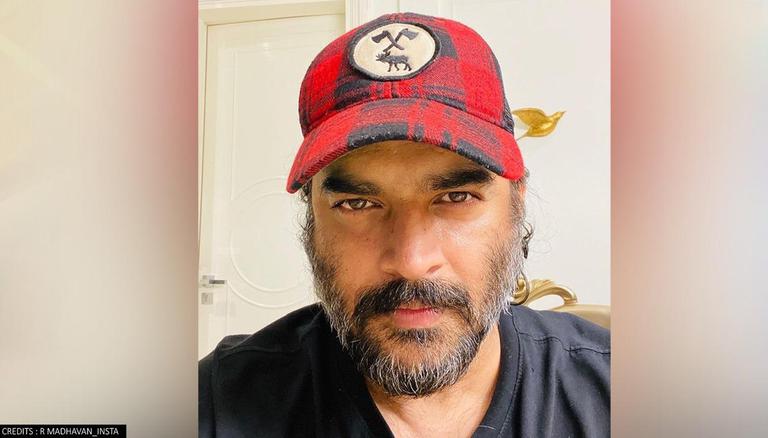 
R Madhavan is one of the prominent artists from the movie industry who has essayed some iconic roles in his career in Hindi, as well as, in the regional Indian movie industry. As the actor is currently working on his upcoming trilingual project, he recently gave a sneak peek at his look and informed the fans about how he was back to the floors for his shoot. Many of his fans were thrilled to hear the news and praised him for his new look for the movie.

R Madhavan gears up for his upcoming movie

R Madhavan recently took to his Instagram handle and shared a picture of himself in which he can be seen staring at himself in the mirror showcasing his intense look. He can be seen sporting a white tee with an olive green jacket on. In the photo, he wrote how he was shooting for his project in Mumbai and expressed his feelings about how it was great to be back on the floors. He further added smiles and heart emojis next to it.

Several fans and celebrity artists took to R Madhavan’s Instagram post and dropped in cute compliments for the actor stating how he looked hot and handsome. Actor Shilpa Shirodkar, Vishnupriya Ravi, Rohini Iyer, and others poured in heart-eyed emojis to depict how amazing her looked in his photo while others added fire emojis in the comments section to express how hot he looked. Many fans also took to his Instagram post and showered tons of praise for his new look while many of them stated how excited they were to see him back on the sets. The rest of the fans dropped in hearts and fire emojis in the comments to depict how his latest photo was amazing and full of fire. Take a look at some of the reactions to R Madhavan’s Instagram post.

READ | 'Man with a heart of gold': R Madhavan and other celebs pay tribute to Raj Kaushal 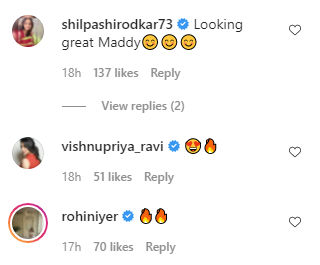 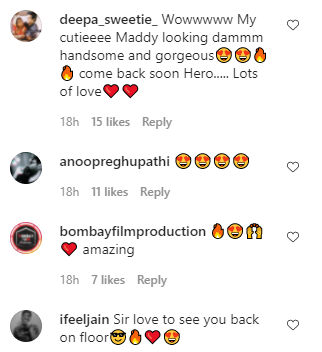 The actor is currently working on his highly-anticipated trilingual movie, Rocketry: The Nambi Effect that is simultaneously being shot in Tamil, Hindi, and English. Based on the life of the former scientist, Nambi Narayanan, the movie will also be released in Telugu, Malayalam, and Kannada languages. Directed by R Madhavan himself, the actor will also be seen essaying the lead role in the film while other cast members include actors namely Simran, Rajit Kapoor, Misha Ghoshal, Ravi Raghavendra, Karthik Kumar, Gulshan Grover, Dinesh Prabhakar, Mohan Raman, Vincent Riotta, etc. The actor is also gearing up for the release of two of his upcoming web series, 7th Sense and Decoupled on ZEE5 and Netflix respectively.

WE RECOMMEND
R Madhavan's old ad video resurfaces online; fans go gaga over his British accent
R Madhavan and wife Sarita Birje meet actress & friend Shilpa Shirodkar in Dubai; see pic
'Man with a heart of gold': R Madhavan and other celebs pay tribute to Raj Kaushal
R Madhavan reveals what he does to avoid temptation and keep his marriage rock-steady
Here's R Madhavan's list of TV series for you to binge-watch at home during the lockdown