Radhika Madan Extends Gratitude For B'day Wishes: ‘It Came In With A Lot Of Realisations’

As Radhika Madan turned a year older on May 1, she shared a picture of herself and extended gratitude for the birthday wishes she received. Read her note here.


As Radhika Madan turned a year older on May 1, wishes poured in on social media. A day after her special day, the Angrezi Medium actor shared a close-up picture of herself and penned a lengthy heartfelt note. She extended gratitude towards her fans for the numerous birthday wishes she received. In her note, Radhika wrote, "I know our lives are upside down and I'm just thankful that this birthday came with a lot of realizations and gratitude for the things we take for granted."

She then thanked people for taking out the time and sending so much love and blessings across. She added, "Agar is saal kuch maanga hai toh bas aap sab ke liye dua," (If this year I've asked for something, then that's only prayers for you). As soon as Radhika Madan's birthday special post was up on Instagram, Arjun Bijlani, Gautam Gupta, and many others dropped endearing comments. 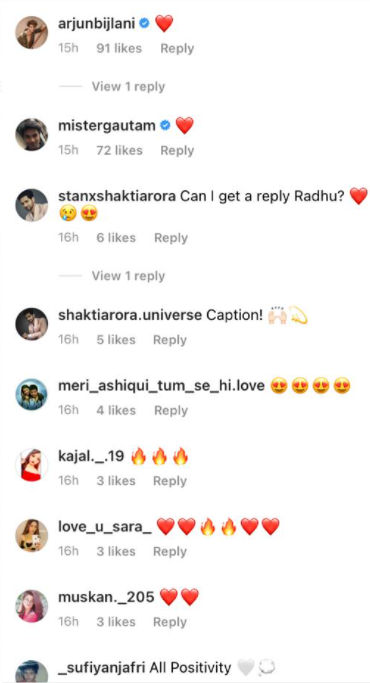 On Irrfan Khan’s death anniversary, Radhika Madan shared a still from the sets of Angrezi Medium and penned a heartening note for the late actor. She recalled playing with Irrfan's beard before the shot. She wrote, "He told me you know what maybe this is the reason Champak would not have cut his beard. I was like exactly! And we laughed." Madan mentioned that they had created their own pool of memories, their own bubble, where there were no words. She remarked that silence spoke out loud.

"To endless silent teachings and love. To this phenomenon, people call Irrfan. Celebrating you every single day Legend. Miss you," she penned in her emotional note. Homi Adajania’s comedy-drama, Angrezi Medium, also starred Kareena Kapoor Khan, who essayed the role of Naina, a cop. The plot of the movie revolves around the life of a hardworking Rajasthani businessman who does everything in his power to make her daughter's dream of studying in London come true.

Radhika on the work front

Radhika Madan will star in two Netflix Original films titled Feels Like Ishq and Ray. While she will be seen playing the role of Avani in Feels Like Ishq, she will essay the character of Divya in Ray. Radhika will also be seen in the movie, Shiddat.