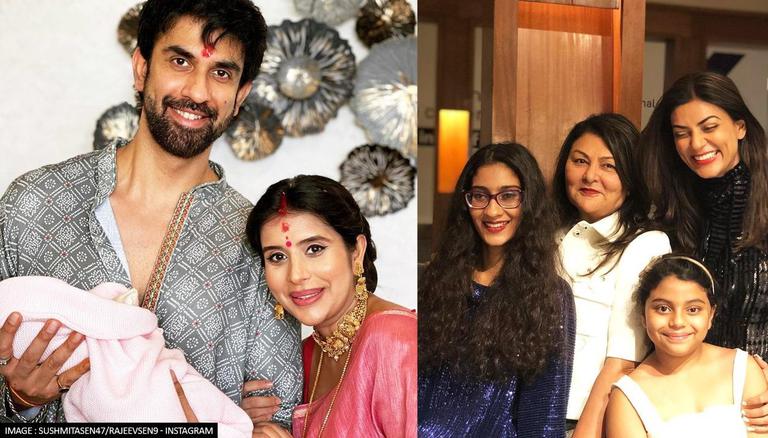 
Sushmita Sen's brother Rajeev Sen and his wife and television actor Charu Asopa recently took to their respective Instagram handles and revealed the name of their newborn daughter. The celebrity couple posted a series of adorable pictures from a prayer ceremony and updated their fans and followers that they have named their daughter Ziana Sen. Scroll down to see the adorable pictures.

Taking to the photo-sharing site, Rajeev Sen posted a string of pictures where he and Charu can be seen posing with the new born and other family members. The new father wrote, "Welcoming our daughter Ziana Sen to our family #blessed." While Charu captioned it, "A picture with ZIANA SEN #us.”

The couple also took to their respective YouTube channels and revealed that the name was given by Aarya star Sushmita's daughter Alisah Sen. They revealed the name Ziana means ‘brave and bold.’ Charu in her YouTube video explained, "This name signifies that the child will be protected by God."

Rajeev explained, "The name was given to us by Alisah Sen. When she said this name to us, we were taken aback." Charu added, "Sushmita didi had thought of a few names. She had thought of a few names for boys and girls. For the boys, one name that we really liked was Zian. So, when we had a girl, Sushmita didi told us that Alisah suggested Ziana is a nice name. That's how we decided the name." She revealed that the Aarya star had also suggested Lavanya and Naira.

Rajeev and Charu welcomed their daughter earlier this month. Excited Sushmita penned a sweet lengthy post on Instagram to welcome the baby into their family. She wrote, "Lakshmi arrives just before Diwali!! IT’S A GIRL!!!! Congratulations @asopacharu & @rajeevsen9 …what a beauty she is!!! I BECAME A BUA THIS MORNING #sooooooohapppyyyyyy." "Not allowed to share baby pictures yet, so sharing mine from just before Charu delivered our little Angel I was blessed to witness it!!! Thank you Doctor @rishmapai for making this such a beautiful & peaceful experience!! You’re just the BEST!!! CONGRATULATIONS to Asopa & Sen family, 3 grandchildren, all girls!!! #yessssss #blessedindeed #sharing #happiness #buakijaan #duggadugga I love you guys!!!” she added.