Rajinikanth Returns To Chennai From US After Health Check-up, Greets Fans At Airport

Superstar Rajinikanth who had jetted of to the USA with his wife a couple of weeks back has finally returned to Chennai on July 9 at midnight. 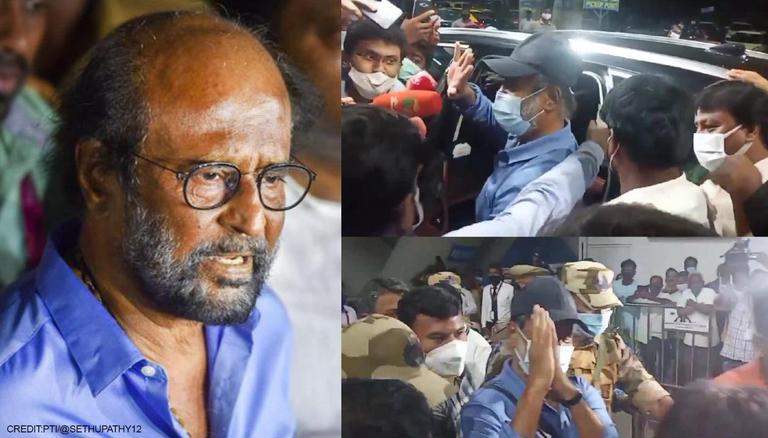 
Superstar Rajinikanth who jetted of to the USA a couple of weeks back has finally returned to Chennai on July 9 at midnight. The actor along with his wife Latha went to the US for a general health check-up with his doctors at the Mayo Clinic in the US. After getting his health check-up done, the actor spent some time there and met a couple of fans in the country. Several pictures and videos of the actor arriving at the Chennai airport have been doing rounds on the Internet.

Rajinikanth returns to Chennai from the US

According to reports, the Thalaiva actor took a flight to Doha, Qatar and from there, he took a connecting flight to Chennai. In the videos, the actor is seen wearing a blue shirt, black cap, and a face mask as he walked towards his car. He waved to the fans who gathered at the airport entrance to see him and thanked them.

After resting for a while, the actor will soon be seen getting back to work and finish his pending commitments. He will resume the shooting of his upcoming film, Annaatthe, in July. The majority of the film was completed much before the second wave of the Covid-19 pandemic hit India. Recently, Sun Pictures, the film's production house, reconfirmed that Annaatthe will hit the theatres on November 4, on the occasion of Diwali. Their post read, "#AnnaattheDeepavali ku ready ah?! @rajinikanth @directorsiva #Nayanthara @KeerthyOfficial @immancomposer #Annaatthe (sic).”

The actor along with his wife left the country on July 19 for body check-ups. Since the Darbar actor got his kidney transplant in 2016, he makes a yearly visit to the US to meet his doctors for a general check-up. Meanwhile, the upcoming film Annaatthe which is directed by Siruthai Siva is a rural entertainer starring the ace star along with Nayanthara, Keerthy Suresh, Meena, Khusbu, Prakash Raj, and Soori. The music of the film has been composed by D Imman.

READ | Rajinikanth interacts with fans during his visit to the US; pics go viral on social media
READ | 'Annaatthe': Rajinikanth starrer gets a release date, to hit screens on Diwali