Rajkummar Rao-Patralekhaa returned to Mumbai as husband-wife after tying the knot in Chandigarh on Sunday. Her saree at the airport became a talking point. 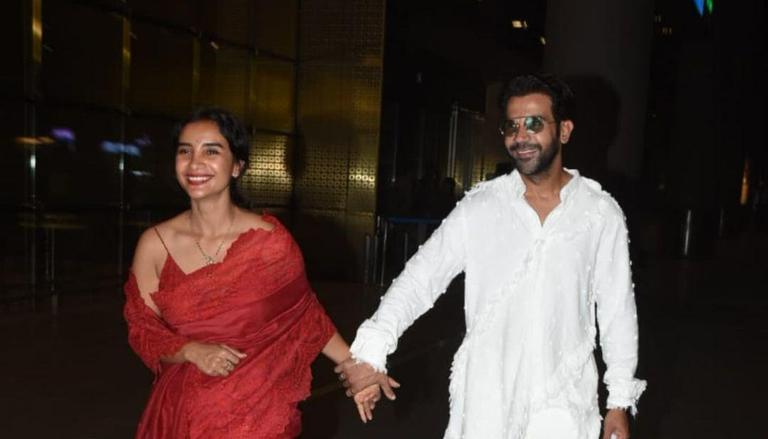 
The toast of the town, Rajkummar Rao and Patralekhaa have returned to Mumbai. The couple, who tied the knot in Chandigarh on Sunday, November 14, grabbed eyeballs as they were clicked at the Mumbai airport on Wednesday, November 17. The newly married couple was the centre of attraction as the paparazzi snapped them.

Rajkummar and Patralekhaa were again in light and dark shades respectively. Among the highlights of the appearance was Patralekhaa's red saree. The saree reportedly costs over ₹50,000.

Rajkummar donned an all-white look with sunglasses, while Patralekhaa all smiling in a red saree as they exited the Mumbai airport. As per media reports, the saree is known as Surkh Farrin Saari and is priced at ₹54,500.

The saree became a talking point for another reason as she forgot to remove the price tag which was visible in the pictures.

Apart from the couple posing for the cameras and being courteous, the paparazzi too took some liberty and called Patralekhaa as 'bhabhiji' (sister-in-law). The duo laughed over the reference.

READ | Patralekhaa's wedding veil had a special message for Rajkummar Rao; Here's what it means

Rajkummar and Patralekhaa tied the knot after an 11-year relationship. The nuptials took place in Chandigarh.

Their wedding outfits had been talked about too. Both were dressed in Sabyasachi Mukherjee outfits for their big day. The bride donned a red tulle embroidered buti saree with an embroidered veil. It also had a special message in Bengali, penned by the designer "Amar poran bhora bhalobasha ami tomae shomorpon korilam," which meant, "I submit my heart-filled love to you."

Rajkummar Rao was dressed in an ivory ensemble which consisted of a Bangalore silk kurta, churidar, gold plated tiger buttons and an embroidered silk ivory jacket.

The duo dropped beautiful candid moments from the wedding and had heartwarming messages for each other on Instagram. Rajkummar wrote that he got married to his 'everything', his 'soulmate', 'best friend' and more. She called her Citylights co-star her 'partner in crime', 'family' and 'best friend for the last 11 years.'

A day before, they had got engaged. A moment when both of them got down on their knees while exchanging rings had  gone viral at that time.