From Rajkummar Rao' engagement with Patralekhaa to Sooryavanshi's box office collections, Here's all that happened this week from Nov 8-14 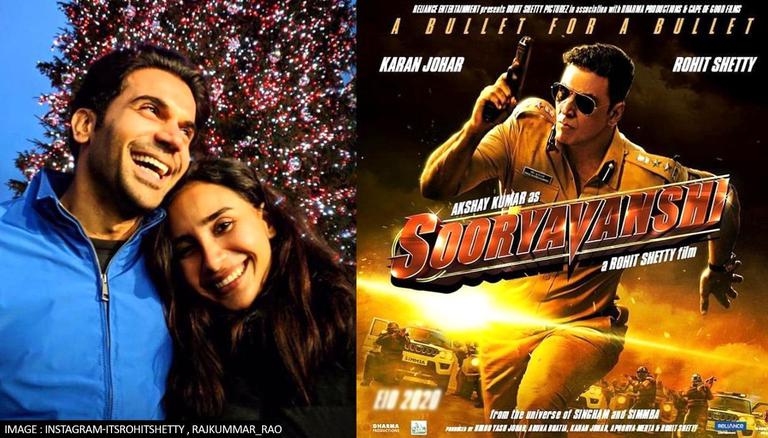 Bollywood star Rajkummar Rao took the internet by storm by getting on his knee to propose to his lady love, Patralekhaa. The couple has been dating for a decade now and is finally set to tie the knot today, November 14, 2021. They are currently in Chandigarh and here are all the details about their wedding venue and guest list. Read More.

It was normal for Bollywood films to hit ₹200 and ₹300 crore clubs all these years, however, due to the COVID-19 pandemic, not one film crossed ₹100 crore mark for the past two years. But that is all set to change with Sooryavanshi. The Akshay Kumar-starrer has become the first to hit this milestone in the COVID-19 era. Read More.

Shortly after being conferred with the Padma Shri award in New Delhi, Kangana Ranaut shared a video message wherein she expressed gratitude for her Guru and parents. The actor, who is being lauded for her trailblazing performances in Manikarnika-The Queen of Jhansi and Panga, mentioned that although she has garnered many accolades for her acting stints, the latest reward recognises her role as a good citizen of the country. Read More.

The much-awaited trailer of the film Chandigarh Kare Aashiqui was finally dropped online by the makers on November 8. The entertaining and quirky love story starring Ayushmann Khurrana and Vaani Kapoor is slated to hit the screens on December 10. The film is helmed by Kedarnath fame director Abhishek Kapoor. Read More.

Actor Kangana Ranaut who is set to don the cap of a producer with her next project Tiku Weds Sheru shared the first glimpse of the main characters. Kangana treated fans with Nawazuddin Siddiqui and Avneet Kaur’s first look posters from the film. Read More.

READ | Rajkummar Rao proposes to girlfriend Patralekha on one knee in these FIRST pics; See

Amitabh Bachchan went down memory lane as he shared a throwback picture to celebrate 52 years of the release of his film Saat Hindustani. The actor made his Bollywood debut with the Khwaja Ahmad Abbas' directorial, which also starred Madhu, Utpal Dutt, Shehnaz, A K Hangal, Anwar Ali in pivotal roles. The film showcased the heroic journey of seven Indians as they attempted to liberate Goa from Portuguese colonial rule. Read More.

'I Would Love To...': Vicky Kaushal Opens Up About Wedding Plans Amid Rumours With Katrina

As the rumours about Vicky Kaushal's marriage with Katrina Kaif have been doing rounds on social media, the fans have eagerly been waiting to hear news on the same. Actor Vicky Kaushal recently opened up about his wedding plans and revealed the qualities he would like to have in his wife. Read More.

READ | Who is Patralekhaa? All you need to know about the actor and Rajkummar Rao's ladylove

Actor Vicky Kaushal, who has given hit films like Uri: The Surgical Strike and Masaan, is all set to feature in a quirky comedy film Govinda Naam Mera. Apart from Vicky, the film will also star Bhumi Pednekar and Kiara Advani. The actor announced the news with a poster of the film that showed Vicky him portraying the role of a dancer. Read More.

The auspicious occasion of Chhath Puja which is dedicated to Surya Dev (Sun God) and Chhathi Maiya, is celebrated by great pomp and fervour by the people. Mostly the natives of Bihar, Jharkhand, West Bengal, and other eastern parts of Uttar Pradesh celebrate the festival with a lot of zeal while dwelling on the festivities. On the joyous occasion, Bollywood celebrities took to their respective social media handles and entended their wishes while asking fans to celebrate it while keeping their safety on priority. Read More.

As the audience is awaiting the release of Prabhas' highly-anticipated movie, Adipurush, the cast and crew members of the show have constantly been sharing glimpses from the sets on social media and leaving the fans curious. The movie director, Om Raut recently announced the wrap of the film and shared a picture of himself with the lead cast of the film. Read More.