Rangoli Chandel Fires Astonishing Low Blow At Deepika Padukone Over 'Mental Hai Kya' Controversy, Adds That Her Foundation Will Make Kangana Its Ambassador After The Film

Rajkummar Rao and Kangana Ranaut starrer 'Mental Hai Kya' is under the spotlight for its title. The Indian Psychiatric Society raised an objection against its title and wrote to the CBFC chief demanding the change.

Rangoli Chandel, manager and sister of Kangana Ranaut issued clarification on Saturday morning on her Twitter handle, saying, "On behalf of Kangana all I want to say is that everyone will be proud of ‘Mental Hai Kya’ the topic and subject she has chosen will trigger relevant talk and discussions around the stigma".

And now responding to Deepika Padukone's foundation 'The Live Laugh Love', who also joined the protest against the film, Rangoli made a personal attack on the actress and said: "Anyway @deepikapadukone   was despressed many years ago when her break up happened, now she is a happily married woman who is enjoying marital bliss...(contd) @TLLLFoundation. Contd)..whereas Kangana after Jhansi ki Rani proudly wearing the title of Mental,being a young woman its not easy, think about it please, we would like you all to join hands with us, spread awareness and help remove embarrassment and shame attached to this word🙏🏻 @TLLLFoundation."

She also wrote in one of the tweets that TLLL Foundation would take Kangana as a brand ambassador after watching the film 'Mental Hai Kya'.

FACT CHECK: Deepika Padukone is NOT a brand ambassador. The Live Laugh Love Foundation was founded by her infact. 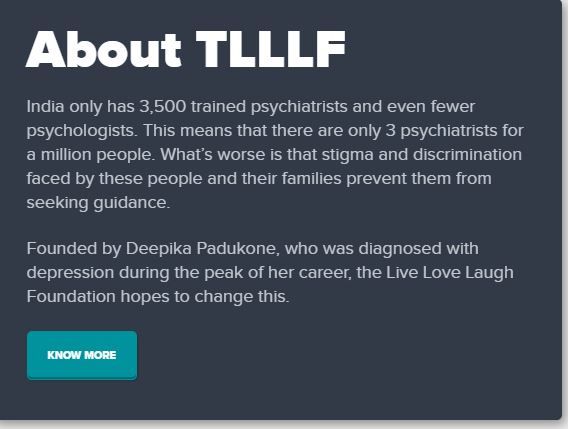 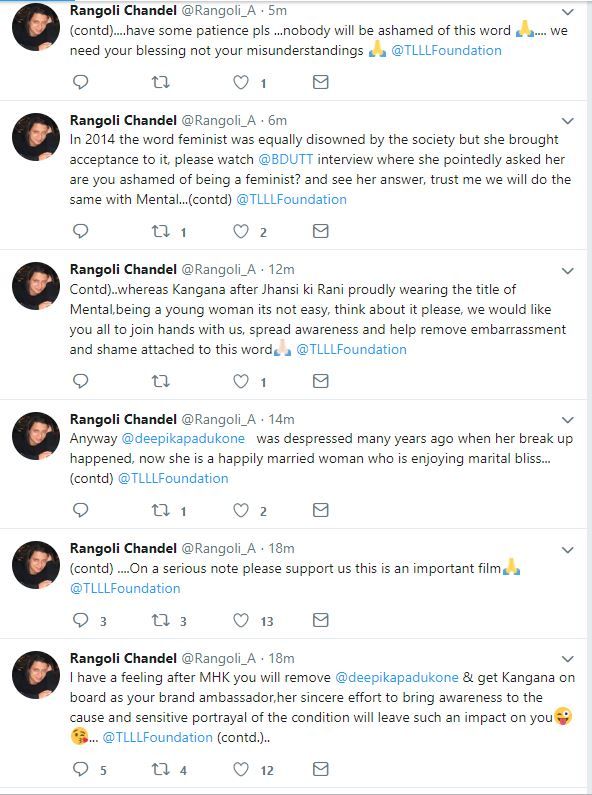 Rangoli earlier compared Deepika Padukone's foundation to Karni Sena and said: ".please don’t be Karni Sena, don’t jump the gun, I assure you, you will love the film." She concluded by saying: "....have some patience pls ...nobody will be ashamed of this word 🙏.... we need your blessing not your misunderstandings 🙏 @TLLLFoundation"

For those unaware, as the very title suggests the film revolves around the quirky characters of Kangana and Rajkummar Rao. According to the makers, the film celebrates the imperfections and the crazy within individuals and shouts out ‘Sanity is overrated’. The upcoming thriller film marks the second collaboration between Rajkummar Rao and Kangana Ranaut, as the pair previously shared the screen for Vikas Bahl's 'Queen'.