Rangoli Chandel Shows Off Her 'sexy Moves' In A Throwback Pic From Cousin's Wedding; See

Rangoli Chandel has shared a throwback picture from her cousin brother Karan's wedding on Instagram. Scroll to see the picture and know more

Kangana Ranaut's sister Rangoli Chandel is an avid social media user and often shares glimpses from her life on social media. On February 21, she took to Instagram to share a throwback photo from her cousin Karan's wedding. In the caption, she has recalled how she and her cousin sister outdid the 'ladkiwale'.

In the picture shared by Rangoli, she is seen dancing with her cousin sister. She is wearing a silver suit and smiling broadly as she enjoys the wedding festivities. In the caption of the post she wrote, "Memories from Karan’s wedding... that’s my cousin Neetu didi and I. we performed and thanks to my sexy move and her funny act we outdid Ladki wale".

Several netizens have showered love on Rangoli's photos. Many have used the heart-eye and the red heart emojis to express appreciation. See some of their reactions below: 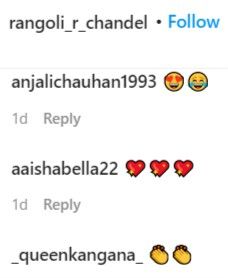 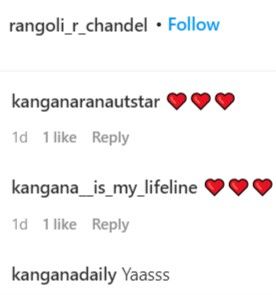 Rangoli Chandel's Instagram feed sees a lot of pictures and videos with her family. She also shares a lot of pictures with her sister Kangana Ranaut. Recently, she shared an appreciative post for Kangana who has designed their younger brother Aksht's house. She also shared a slideshow of before and after pictures of the house post the decoration done by Kangana. Rangoli has also showered heaps of praise for Kangana's sense of design and creativity.

In November 2020, Rangoli and Kangana's brother Aksht tied the knot with Ritu. The sisters have extensively shared pictures from the various wedding festivities on their respective social media. The wedding took place in Udaipur. Introducing her brother and his bride to her fans with a slideshow of pictures, Rangoli wrote a lengthy caption as well. In the caption, she has mentioned how Kangana has personally looked at each and every detail of the wedding and has worked on it for over a year. She also wrote how people only see her sister's fiery side and often overlook 'involvement with her surroundings'.

Kangana is currently filming for her action thriller movie Dhakad which is a Razneesh Razy Ghai directorial. The movie also stars Arjun Rampal in a prominent role. The release date of the movie has not been announced yet. She is also gearing up for the release of her bilingual film Thalaivi which is based on the life of J Jayalalithaa.