As Arjun Kapoor's film 'India's Most Wanted' released on Friday, May 24, Ranveer Singh turned cheerleader for his 'Gunday' co-star and friend.

'Gunday' co-star Arjun Kapoor and Ranveer Singh's epic friendship has been winning millions of hearts ever since. Now, fans got to see an instance of the same yet again when Arjun Kapoor's film 'India's Most Wanted' released on Friday, May 24. Ranveer Singh turned cheerleader for his buddy and industry mate and put out a post giving a shout out to his 'Baba'

He took to Instagram and shared a still of Arjun from the film in his story saying, "The brooding sleuth. Proud of you, Baba #indiasmostwanted" 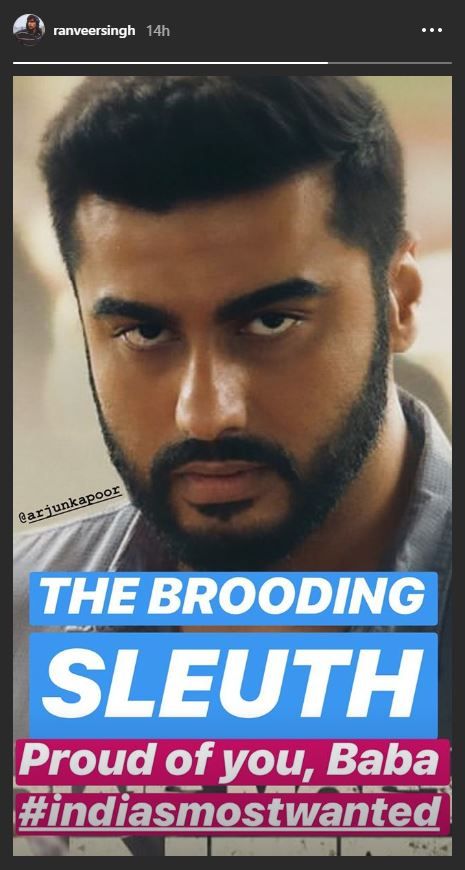 Bollywood actors Arjun Kapoor and Ranveer Singh who won the hearts of the audience with their on-screen rapport in 'Gunday' are known to be best of friends. From partying together to pulling each other's legs the Bollywood buddies have been setting major friendship goals for the internet.

Meanwhile, Ranveer's wife actress Deepika Padukone also reviewed Arjun's latest venture. Sharing a poster from the film, she wrote, "gripping and entertaining... a story that needed to be told! Congratulations!" and tagged Arjun in the same. 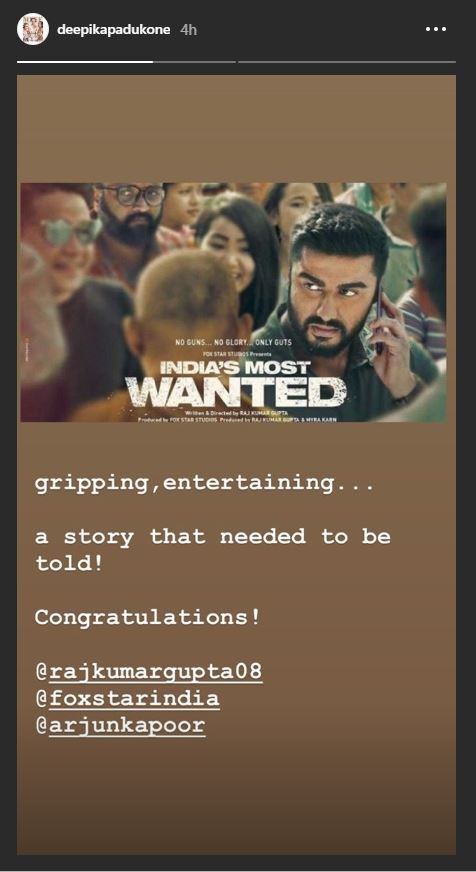 Ranveer and Arjun who address each other as 'Baba' are known to be very close friends. From dancing together at sister Sonam Kapoor's wedding, to laughing at chat shows, the two actors have shared a brotherly bond with each other even before their Bollywood debuts. They also sparked off their bromance on-screen with the 2014 film 'Gunday' and have got closer over the years. In fact, Ranveer is also the maternal second cousin of actress Sonam Kapoor and Arjun Kapoor.