Ranveer Singh To Face The Wild With Bear Grylls In 'Ranveer Vs Wild'; Teaser Out

While Ranveer Singh has proved his acting mettle and fitness, the actor is now all set to embark on a new journey in the wilderness of nature with Bear Grylls 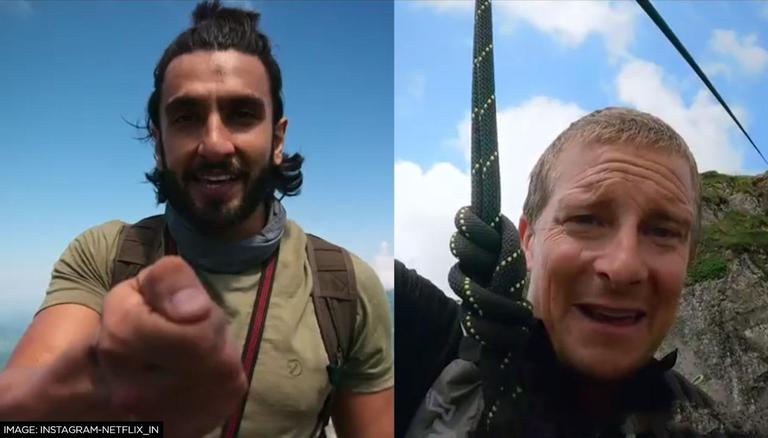 
Touted to be one of the biggest stars in Bollywood, Ranveer Singh is not only known for his acting skills but also for his energetic persona. The actor has played various roles, including Alauddin Khilji, Peshwa Bajirao, Police officer Simmba and more, throughout his acting career. While he has proved his acting mettle and fitness with these roles, the actor is now all set to embark on a new journey in the wilderness of nature with Bear Grylls.

After Bollywood stars Akshay Kumar, Ajay Devgn, Vicky Kaushal and more, Ranveer Singh is now gearing up to explore the wilderness with television presenter and adventurer Bear Grylls. However, the actor has seemingly taken the show to another level as his survival in the wild will depend on the audience. Netflix is bringing an interactive special in which the viewers' choices will decide the actor's fate in the jungle.

The makers of the show and Ranveer Singh recently dropped the first teaser of the upcoming show Ranveer Vs Wild. The teaser begins with some glimpses of a jungle filled with wild animals. The text "Choose danger, choose thrill. Your choice decides Ranveer's fate" appears on the screen and gives the first glimpse of the Jayeshbhai Jordaar star. He was seen wearing an olive t-shirt on a pair of track pants.

The teaser further features Ranveer Singh trying his best to survive in the dangerous jungle. At one point, he is also seen running from a wild bear after which Bear Grylls teases what the show will offer and says, "Ranveer is about to get a full adventure".

The clip follows Ranveer Singh trying his best to survive in the dense forest that promises an adventurous experience for the viewers. Sharing the teaser, the OTT giant wrote, "Jungle mein Mangal! Ranveer VS Wild, an interactive special packed with thrilling adventures is COMING SOON on @netflix_in."

The show will premiere on July 8.

More about Ranveer Vs Wild

As per a report by Pinkvilla, the upcoming Netflix show has been developed by Bear Grylls himself and is touted to be one of the biggest non-fiction shows on the OTT platform. Moreover, the project was discussed by the British adventurer, Ranveer Singh and Netflix for a long time. It is reportedly a big-budgeted show and will mark the "biggest drop" for Netflix across the globe.