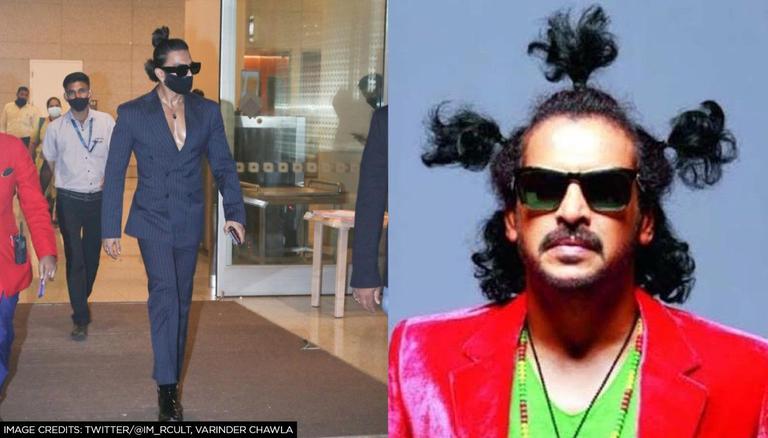 
Ranveer Singh has become synonymous with quirks over the years, as he flaunted some out-of-the-box outfits and hairstyles. The latest was the actor donning a double ponytail at the launch of Ram Charan-Kiara Advani's new film.

Ranveer's new look of a double pony, one at the back and the other on top, grabbed eyeballs when he was snapped at the Mumbai airport, on his way to Hyderabad. The buzz around it continued with him joining Ram Charan, Kiara Advani and his Anniyan remake director Shankar at the launch event of the movie, SVC 50.

Netizens gave it names like 'dhaniya (coriander) hairstyle', 'murgi (chicken) cut' and more. One photoshopped Ranveer in a Rajpal Yadav meme from Chup Chupe Ke to quip that there was no chance of him changing, in terms of his unique style.

Some shared their comments on a picture of Baahubali maker SS Rajamouli looking at Ranveer's look.

However, the most common comment was that the look was not that unique or original as it seemed. They shared pictures of Sandalwood star Upendra's look in one of his films, where he had multiple ponytails.

This hairstyle was created by our real star @nimmaupendra sir back in 2010. pic.twitter.com/p8b9zlzI8b

This is not the first that Ranveer's ponytail had been in the news. Previously, his look at the time of an awards show in 2019 had gone viral. At that time, his wife, actor Deepika Padukone had shared a meme of his look alongside that of animated character Agnes Gru and asked who had done it better.

His look with long hair in a flashy blue outfit and over-the-top accessories was one of his other looks that had become fodder for memes recently.

Meanwhile, on the professional front, Ranveer Singh is currently working on the Rocky Aur Rani Ki Kahaani. He is reuniting with his Gully Boy co-star Alia in the movie, which also stars Dharmendra, Jaya Bachchan and Shabana Azmi. Among the other projects in his kitty include Rohit Shetty's Cirkus, Jayeshbhai Jordaar, 83, Sooryavanshi and the Anniyan remake.