Producer Rhea Kapoor has shared a picture of her sporting a bikini at a beach in Maldives; Talked about how she thought she was looking "fat"

Although Rhea Kapoor has not stepped in front of the camera like her sister Sonam, she is quite popular on social media. She actively posts on her Instagram account has shared several unseen pictures of herself and her family. She has quite recently posted one of the rare pictures of herself sporting a bikini while enjoying her time at a beach. She has also shared about how she was conscious of her body, thinking that she was looking fat, along with sharing a popular quote by Tina Fey about beauty.

While Rhea makes sure to share her pictures every now and then on social media, her latest click that shows her sporting a bikini is quite rare. The picture is from her vacation in Maldives, where she can be seen having a good time on a beach in Maldives in a tropical outfit. She wrote in her caption about how she felt conscious of her body, getting the feeling that she was “fat”. She also made a rhetoric question about how people can “never win” with themselves, indicating the physical insecurities that people face.

READ | Rhea Kapoor and Karan Boolani shower each other with kisses; netzines drop hearts on post

She then went on to share a quote by Tina Fey, that reads, “If you retain nothing else, always remember the most important rule of beauty, which is: who cares?”. The post hardly took any time receiving positive reactions from her followers, who complimented her picture. Many even came out in support of her message about the standards of beauty that are often set on social media. Some even praised the quote by Fey in the comments. 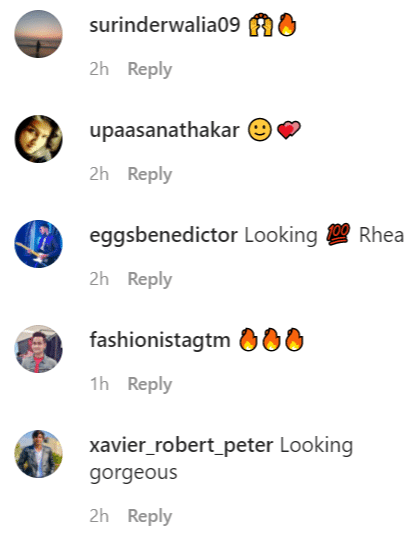 Rhea Kapoor has produced three major films to date. These include Khoobsurat, Aisha and Veere Di Wedding, all of which stars her sister Sonam Kapoor. She has also professionally worked as a stylist and even launched her own clothing line with Sonam called Rheson. While she is quite popular on social media, she has remained out of the limelight unlike Sonam and cousins Arjun and Janhvi Kapoor, who have received a lot of fame, owing to their acting careers.