Richa Chadha and Ali Fazal have left no stone unturned as they get into Halloween spirits as Cleopatra and a glittery Vampire. See the pictures below. 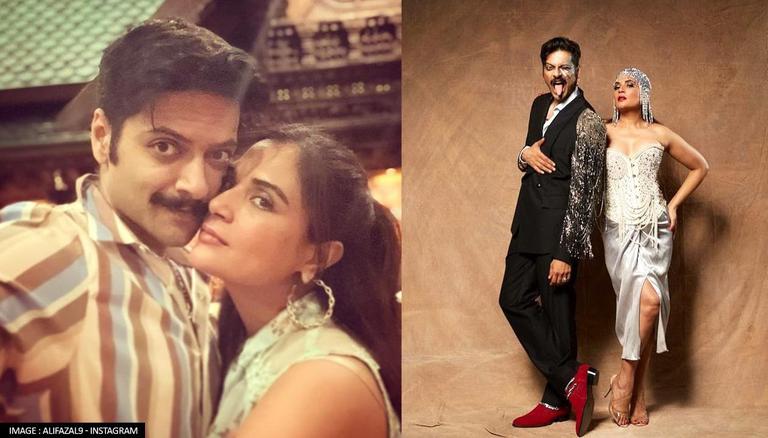 
Actors Richa Chadha and Ali Fazal sent the internet into a frenzy by dressing up as the Egyptian queen Cleopatra and a glittered-adorned Vampire, respectively, to vamp up Halloween 2021 preparations. The duo is not celebrating alone as actors Amrita Puri and Amyra Dastur also jumped on the celebration. Check out the pictures below.

Taking to their Instagram on October 27, the actors shared their looks for this year's Haloween. The Madam Chief Minister actor was dressed as Egyptian queen Cleopatra by donning a white corseted dress and glittery headgear. Complimenting her look, Fukrey star dressed up as a vampire by sporting a black tux with red shoes. He also sported glittery makeup.

Additionally, Amyra Dastur wore a copper pantsuit and added a fake moustache to her masculine look. She went for a sleek ponytail to complete her look. Actor Amrita Puri donned an animal print fitted dress as she completed the look with the copper-blonde wig. The four actors posed for the photoshoot as Ali Fazal captioned the post by writing, ''Rusty Fiesty Misty Ditsy itsy bitsy all kinds Fitsy. Presenting you. The Family.''

Celebrities and netizens appeared impressed with the squad's Halloween costume as compliments poured in under the post. Actor Sayani Gupta dropped a fire emoji and wrote, ''Too sexy'' while renowned cancer Lauren Gottlieb commented, ''Love this so much!!! 😍❤️''. Actor Dino Morea also seemed to have enjoyed their dress up as he commented, ''Love it. Happy Halloween 🙌🔥''

The couple started dating in 2013 after appearing in the Fukrey movie where Fazal essayed the role of Zafar and Chadha played 'Bholi Punjaban'. They also reprised their role in the second instalment of the movie in 2017. The couple has been open about their romantic relationship with the media and fans. They have also shared plans on getting hitched on several occasions and revealed that the plans are in motion as they hope to get married soon.

On the work front, Richa Chadha was last seen in Madam Chief Minister as Tara Roopram. On the other hand, Ali Fazal is set to appear in the thriller titled Death on the Nile.