June 2 marks the 33rd death anniversary of the icon of Indian cinema Raj Kapoor. The patriarch of the Kapoor family after Prithviraj Kapoor, Raj Kapoor is fondly known as the "Showman of Indian Cinema" for his work both as an actor and a filmmaker.

Riddhima Kapoor Sahni is the daughter of Rishi and Neetu Kapoor and the granddaughter of Raj Kapoor. She took to Instagram to share a throwback photo with her grandfather in remembrance on the occasion of his 33rd death anniversary. Riddhima only added a praying hands emoji in the Instagram story. In the photo, Raj Kapoor is seen flashing a smile with baby Riddhima and Kareena on his lap and the young Karisma Kapoor hugging him from the side. Karisma is the eldest of the three whereas Kareena and Riddhima are of the same age. Take a look at the screenshot of the Instagram Story shared by Riddhima Kapoor Sahni below. 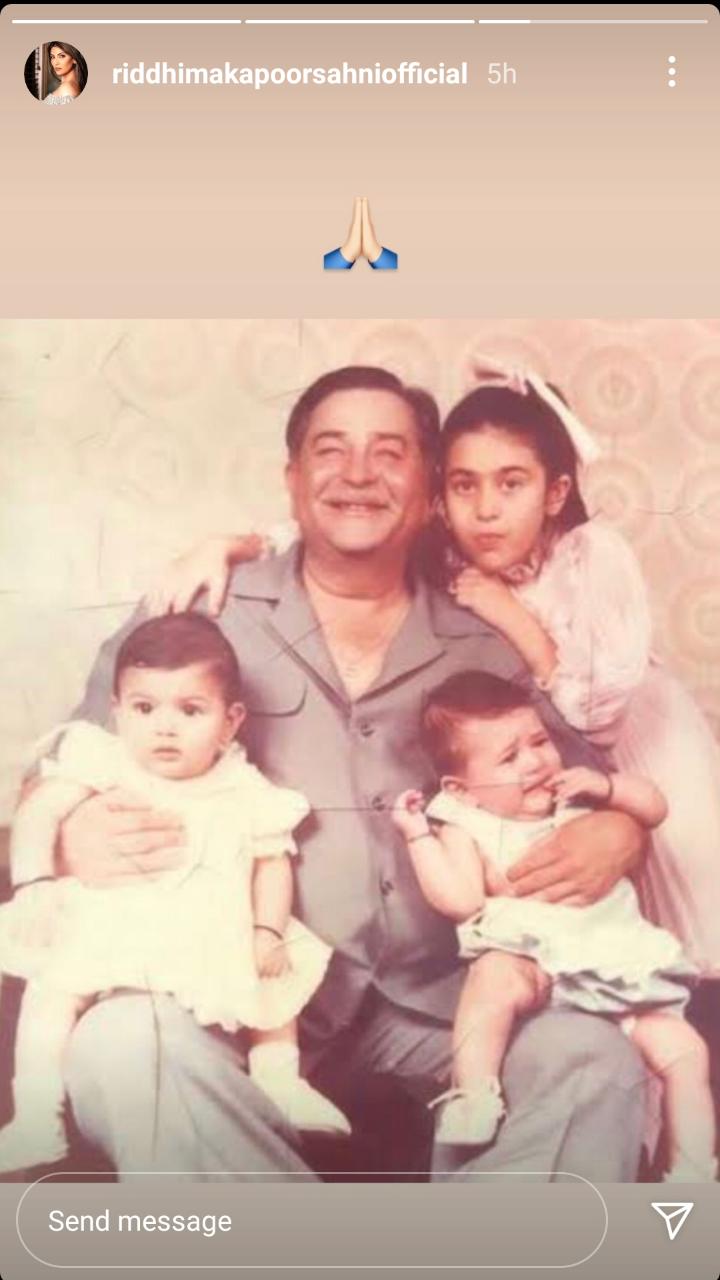 A look at Raj Kapoor's movies

Raj Kapoor's career spans about 40 years in the Hindi film industry. Fondly dubbed as the greatest showman of Indian cinema, Raj Kapoor made his debut in a lead role in 1947 alongside Madhubala in the film Neelkamal. He also tried his hand at directing with films like Barsaat, Aag, Awaara, Shree 420, Mera Naam Joker to name a few. He has also received two nominations at Cannes Film Festival for his films Boot Polish and Awaara.

Raj Kapoor also served as the director for the 1973 hit Bobby, the movie which was his son Rishi Kapoor's first lead role and marked the debut of Dimple Kapadia. His last film before his demise in 1988 was the 1985 film Ram Teri Ganga Maili. The movie starred his youngest son Rajiv Kapoor and Mandakini. Raj Kapoor is the father of Bollywood actors Randhir Kapoor, Rishi Kapoor, Rajiv Kapoor and their sister Ritu Kapoor. Rishi and Randhir Kapoor have had a successful run in the film industry. Their children, Karisma, Kareena and Ranbir also followed in the footsteps and stepped into the limelight.