Rishi Kapoor Would Have Wanted People To Fight To Carry His Bier: Filmmaker Nikkhil Advani

Bollywood director, Nikkhil Advani reveals how the late actor Rishi Kapoor would have wanted his funeral procession to be. Read on to know more about this

Bollywood's legendary actor, Rishi Kapoor passed away on April 30, 2020, battling leukaemia for two years. However, due to the current situation of Coronavirus pandemic in the country, Rishi Kapoor's funeral was attended by only his family members and a few close friends. Opening up about the lack of attendance at the veteran actor's funeral, filmmaker Nikkhil Advani said Rishi Kapoor "would have wanted people fighting" to carry his bier.

Talking about it in an interview, filmmaker Nikkhil Advani revealed the photographs from Rishi Kapoor's funeral "broke" his heart. He further added that the late actor belonged to a generation who thought "no matter what happens, they would have done enough good in life that people would fight to carry their coffin". Advani said that Rishi Kapoor would have wanted people fighting for it.

Nikkhil Advani had directed Rishi Kapoor in movies like Patiala House and D-Day. He also recalled an incident from the Vinod Khanna's funeral where Rishi Kapoor had accompanied him. He revealed that the late actor had been furious about the lack of attendance at another legendary Bollywood actor's funeral. Rishi Kapoor had even tweeted about it

Shameful. Not ONE actor of this generation attended Vinod Khanna's funeral. And that too he has worked with them. Must learn to respect. 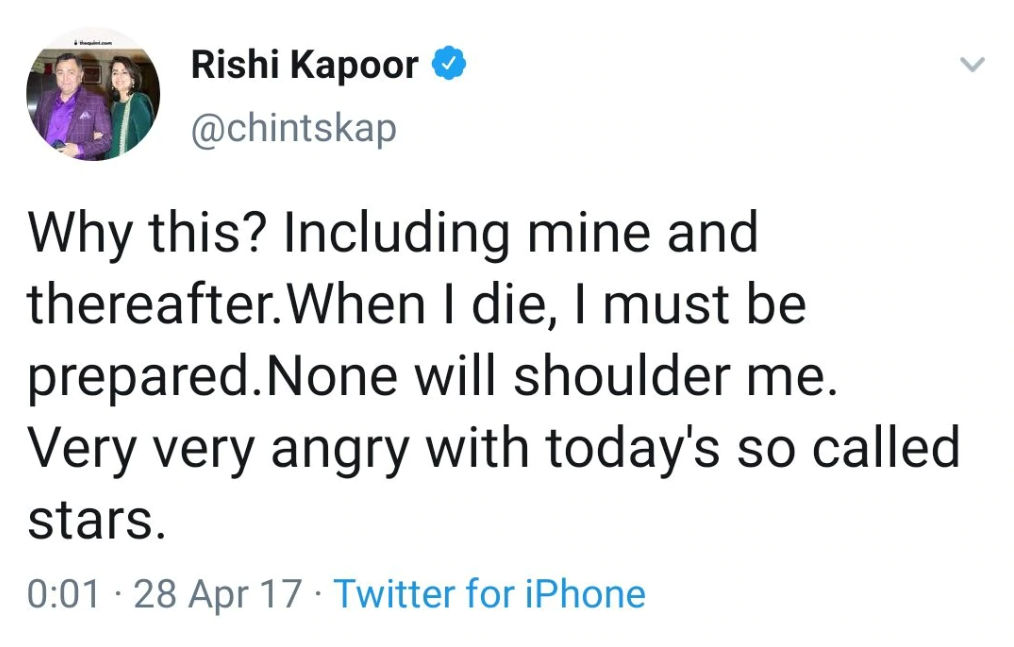 Rishi Kapoor's funeral took place at Chandanwadi crematorium at Marine Drive in Mumbai. He had undergone treatment for leukaemia in New York for over two years before succumbing to it on Thursday morning. His brother Randhir Kapoor confirmed the news of his death.

Later on Sunday, May 3, Ranbir Kapoor immersed his ashes at Banganga. He was accompanied by Neetu Kapoor, Riddhima Kapoor Sahni, Alia Bhatt and Ayan Mukerji. A prayer meeting was also arranged at Rishi Kapoor's residence. The whole film fraternity mourned the loss of the legendary actor who had spent over 40 years in the industry.