Roohi review is finally in. Film critic Taran Adarsh took to Instagram and shared his take on this latest horror comedy starring Rajkummar, Janhvi, and Varun.

Roohi is one of the first films from Bollywood to release in the cinema halls amidst the COVID-19 pandemic. The film released today, March 11, 2021. The Roohi cast has been on a promotion spree for the past few weeks. Now, film critic Taran Adarsh has taken to social media to express his views on this latest horror-comedy helmed by the Stree team.

READ | Rajkummar Rao on being thrown out of films because of a 'star'; sheds light on 'Roohi'

In his Instagram post, Taran Adarsh shared a still from the film and added his #OneWordReview about Roohi. He described the film as “DISAPPOINTING”. He further explained that Roohi is nowhere close to Stree. He added that it has weak screenwriting, some parts of the film work but in “bits and spurts”.

Taran Adarsh further continued and wrote that Roohi’s second half and climax, lacks the impact it needs. He then appreciated Janhvi Kapoor’s latest performance and said it is “very good”. While talking about Rajkummar Rao and Varun Sharma in the film, Taran Adarsh wrote that they “excel” as their characters. Take a look at Taran Adarsh’s Roohi review below.

READ | Will Roohi release on Netflix? Will the horror comedy have a digital release, and when?

Taran Adarsh’s Instagram post got immense response from the audience. One fan commented on how he knew already that the film was going to be disappointing. While another audience member talked about how Roohi's cast member Rajkummar Rao was over-acting in the film. Some other audience members seemed disappointed by the review of the film. Take a look at all of these comments on Taran Adarsh's Roohi review here. 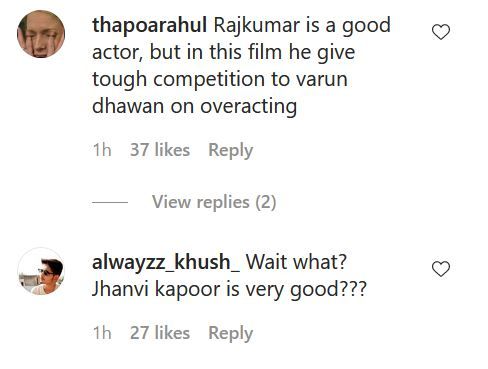 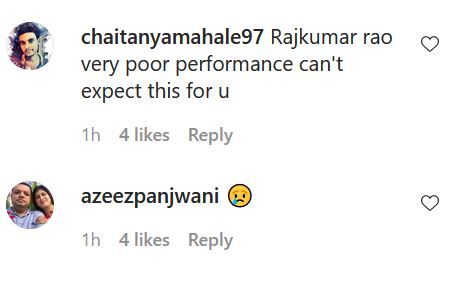 As mentioned earlier, Roohi has been helmed by the hit horror-comedy team of Stree. Stree revolved around a village where every year, men get kidnapped by a woman’s spirit known as Stree. Soon, Rajkummar Rao, Shraddha Kapoor, and some of Rao’s friends along with Pankaj Tripathi begin investigating this mystery. Stree was one of the most successful films of 2018. Coming back to Roohi, the film revolves around a ghost named Afza who captures brides on their honeymoon. In the film, Rajkummar Rao and Varun Sharma’s characters kidnap Janhvi Kapoor a.k.a. Roohi. But soon, Roohi becomes possessed by Afza’s spirit. It will be interesting to see how Roohi performs at the box-office considering these mixed reviews the film has received.