Actors Jr NTR and Ram Charan, who were shooting for SS Rajamouli’s 'RRR' in Ukraine, Europe, came back to Hyderabad, recently; Watch video 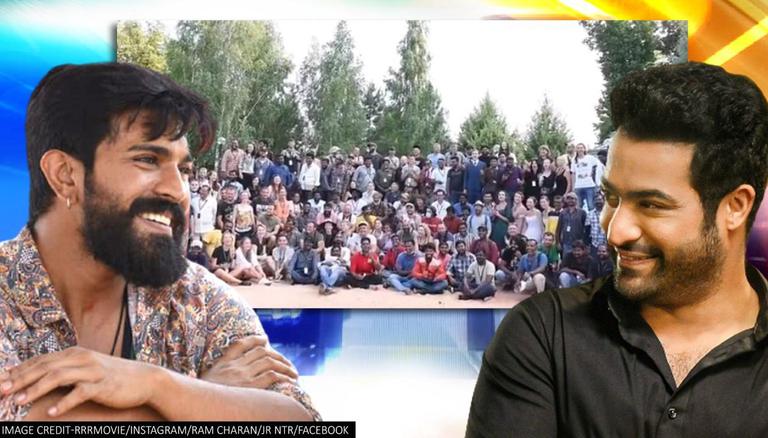 
Actors Jr NTR and Ram Charan, who were busy shooting for SS Rajamouli’s RRR in Ukraine, Europe, came back to Hyderabad on August 18 and 19, respectively, after wrapping the film’s shoot sequence. The entire cast and crew took to Instagram to share a video and announced that the film’s two-week-long song schedule is wrapped up. Directed by SS Rajamouli, the film is set to release in theatres on October 13.

Actors Jr NTR, Ram Charan, director Rajamouli and the RRR team headed to Europe earlier this month for the film's shooting. After a gruelling schedule at the location, the team reached Hyderabad. Soon, the makers will wrap up the remaining portions of the shoot. On August 18, Jr NTR landed at the Hyderabad airport after completing the shoot. For his airport look, the actor wore a white t-shirt and paired it with blue denim. Several pictures of him spotted at the airport have gone viral on social media.

The forthcoming magnum opus is set in the pre-independence era and narrates the fictional tale of two Indian freedom fighters, Komaram Bheem and Alluri Seetharama Raju. Jr NTR and Ram Charan play the lead roles in the film. Meanwhile, Alia Bhatt will essay the role of Sita, Charan’s love interest. The music for the film has been composed by MM Keeravani. Previously, the makers had shared the making of the film video that gave a glimpse of the film. The video introduces all the key characters from the movie and also features a few foreign actors. PEN Studios has bagged the theatrical distribution rights across North India and has also bought worldwide electronic rights for all languages. From big-scale power-packed action sequences to the best visual sequences, the film it assures to be a blockbuster.

READ | RRR has a fan in this sportsman, know which cricketer promoted this in the past

WE RECOMMEND
'RRR': SS Rajamouli opens up on new track 'Dosti', says 'didn't expect this response'
Team RRR including Ram Charan and Alia Bhatt reach Ukraine for the last leg of their shoot
Jr NTR takes over 'RRR' Instagram account, shares BTS video with Ram Charan, SS Karthikeya
RRR has a fan in this sportsman, know which cricketer promoted this in the past
'RRR': Jr NTR poses with SS Rajamouli wearing 'first ever' ID cards on sets; see pics