‘Saaho’ trailer immediately shot to the top of the trends on Saturday as it hit social media. However, the Prabhas-Shraddha Kapoor-starrer also inspired a flurruy of memes on Twitter.

Written By Joel Kurian | Mumbai | Updated On: August 11, 2019 14:48 IST
There were memes galore as ‘Saaho’ trailer starring Prabhas and Shraddha Kapoor was unveiled.

‘Saaho’ trailer immediately shot to the top of the trends on Saturday as it hit social media. From the high-octane action sequences, romance between Prabhas and Shraddha Kapoor or the visual of the ‘Baahubali’ actor’s bare-back shower scene, there was a lot for the fans to cheer for. However, even the neutrals had a lot going for them, as the dialogues helped them come with a flurry of memes.

READ: Saaho Trailer: Prabhas-Shraddha Kapoor Movie Promises To Be An Action Extravaganza Like None Before

Murali Sharma’s dialogue, “Content sahi hota hai lekin visuals bahut disturbing hote hai” was one of the favourites of the meme-makers, connecting it to Baigan ka Bharta, their academic assignments and more.

Me showing my assignments to my Professors #SaahoTrailer #Saaho pic.twitter.com/EUogQICbLV

Me describing Baingan ka bharta to a friend. #SaahoTrailer pic.twitter.com/ifDciOt5Sb 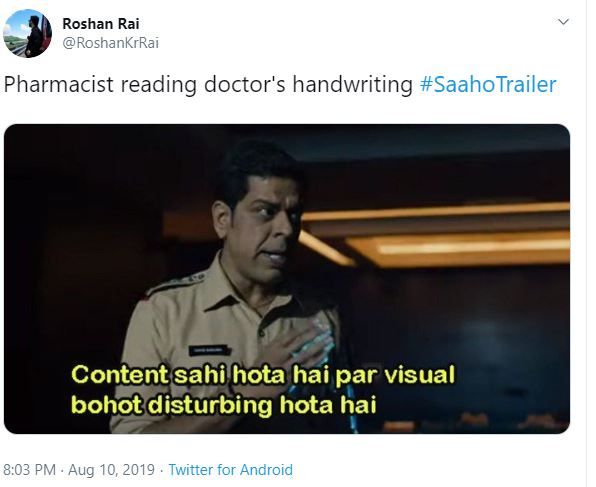 The scene where Shraddha points the gun at Prabhas also fetched interesting reactions, connecting it to how life or your crush treats you. 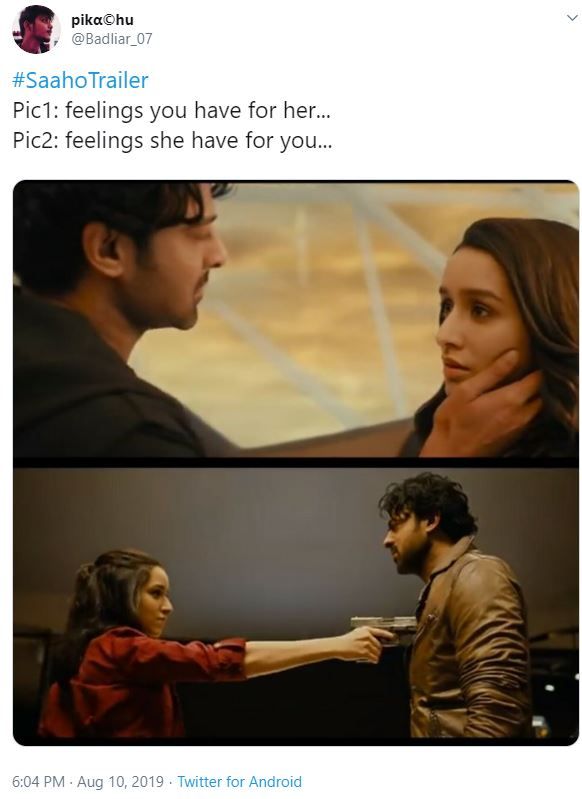 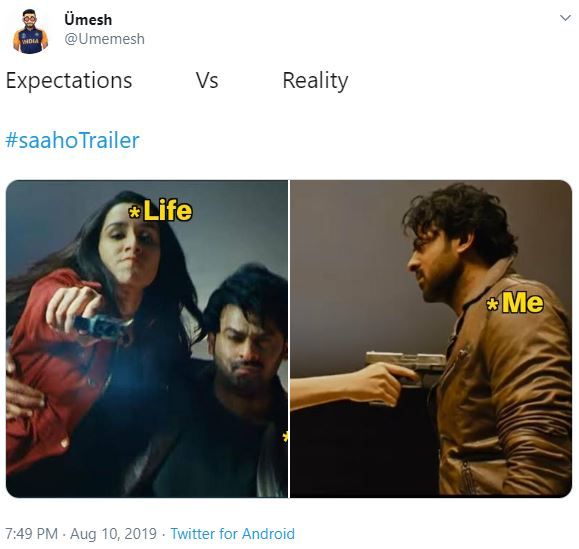 Netizens also had a gala time over the trailer in Tamil, Telugu and Malayalam releasing before Hindi and their impatience over it. 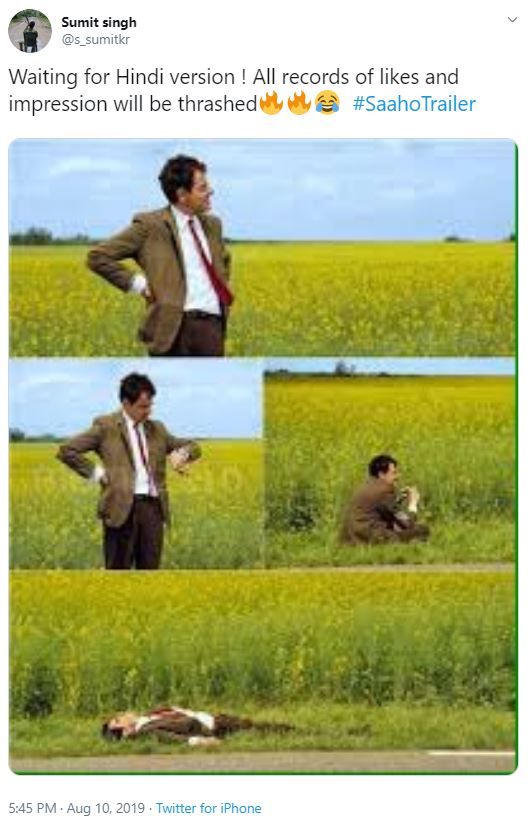 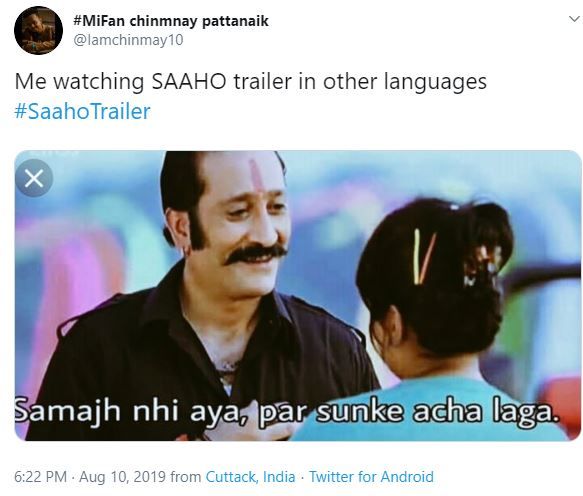 READ:Saaho Out, Once Upon A Time In Hollywood In: 3-way Battle Continues As Leonardo DiCaprio, Brad Pitt-starrer Books Independence Day Release

How last-benchers acted like gangsters or Bollywood reactions to ‘Saaho’ trailer were some of the other funny memes. 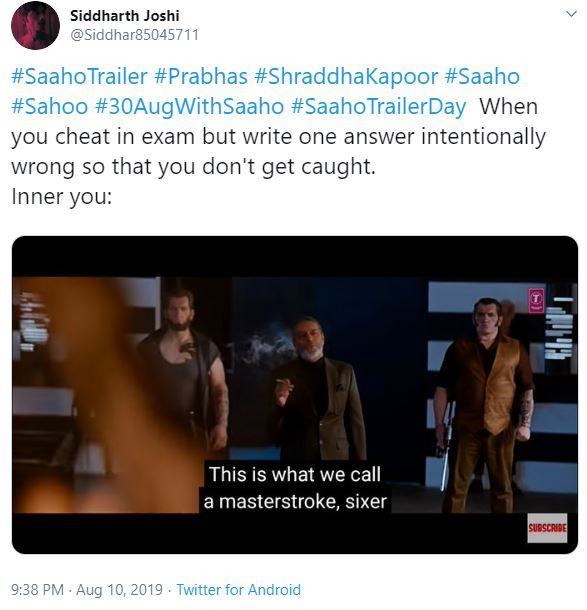 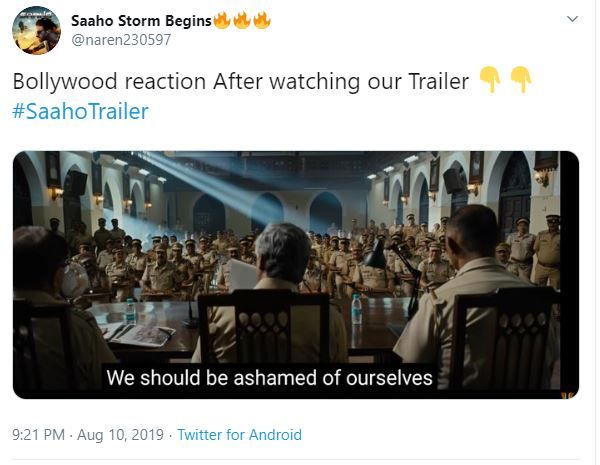 The film has been directed by Sujeeth. ‘Saaho’, produced by UV Creations, releases in Tamil, Telugu and Malayalam, while the Hindi version is presented by T-Series. ‘Saaho’ hits the theatres on August 30.

This is Prabhas’ first film after the mammoth success of ‘Baahubali: The Conclusion’, directed by SS Rajamouli and also starring Anushka Shetty, Tamannaah Bhatia, Rana Daggubati, among others, which reportedly earned over Rs 1000 crore at the box office.