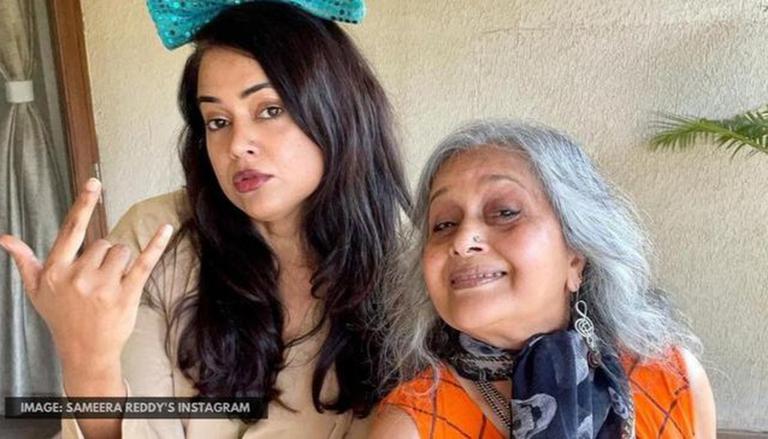 
Actor Sameera Reddy and her mother-in-law, Manjri Varde, celebrated one year of their hilarious "Messy Mama & Sassy Saasu" series on Instagram last month. The mother-in-law and daughter-in-law duo is quite popular on social media for their rib-tickling banter in Sameera's Instagram videos. In her latest interview, Sameera spoke about how it all started and revealed that she has "discovered a Meena Kumari" in her husband's mother.

Sameera Reddy told Pinkvilla that her mother-in-law Manjri Varde was extremely shy initially to even let Sameera take a photograph of her, but has now found a "Meena Kumari" in her. The De Dana Dan actor shared that they recently celebrated one year of "Messy Mama & Sassy Saasu", which had come around last year during the nationwide COVID-19 lockdown. The 42-year-old also spoke about never spending "so much time" with her mom-in-law earlier and admitted that they've "driven each other crazy" at some level.

Elaborating further on the same, Sameera Reddy stated that a month into the lockdown, both of them realised they can have a little bit of fun because they were aware of the crazy situation outside. She even revealed that videos with her children also happened because of the lockdown.

Check out one of the recent Sameera Reddy's videos with Manjri Varde below:

Speaking about parenting in contemporary times, the Aakrosh actor said parenting is difficult in the current situation of the coronavirus pandemic. She added that every parent is struggling to strike a balance between work and kids as all of them are at home the entire time. Sameera also mentioned that the situation is even difficult for one's own relationship to work with their partners because everyone is "thrown together".

She said that they have been trying to study online and due to lockdown, one has to be everything for their kids, including becoming their teacher. As a result, one does not get enough time to spend with their spouses, expressed Sameera. The polyglot actor concluded by saying parenting, in general, is a lot of pressure, a lot of hard work, a lot of expectations and a lot of judgments from outside.