Ahead of the release of their upcoming film 'Samrat Prithviraj,' Bollywood stars Akshay Kumar and Manushi Chhillar arrived in Varanasi. 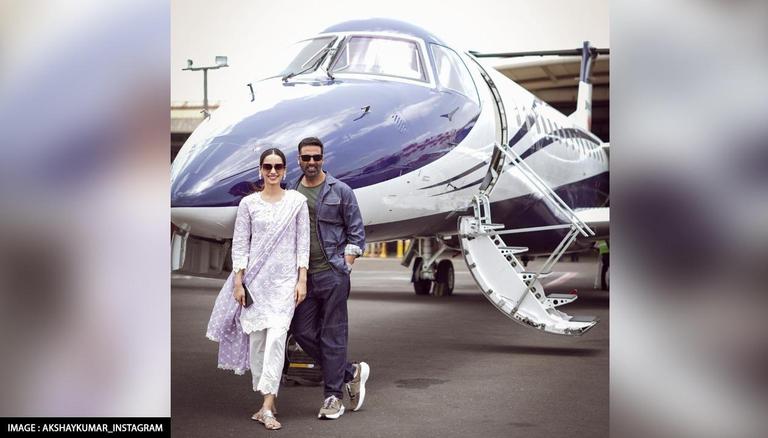 
Bollywood star Akshay Kumar is currently gearing up to play the role of the mighty 12th-century king Prithviraj Chauhan in the upcoming film Samrat Prithviraj. The film is all set to hit the theatres in less than a week and its cast and makers are currently involved in its promotion. The movie will also see Miss World 2017, Manushi Chhillar, making her Bollywood debut. As the movie gears up to hit the theatres soon, Akshay Kumar and Manushi Chhillar recently jetted off to Varanasi for film promotions.

Taking to his Instagram handle, Akshay Kumar shared a picture from Varanasi as they landed in the city with his co-star, and in the caption expressed their excitement to reach 'Vishwanath ki nagari.' In the photo, the former could be seen donning a denim shirt on an olive green jacket and pairing them with a pair of blue jeans. On the other hand, the debutante wore a lilac and white salwar suit. The film's duo shared smiles as they posed in front of a plane. Sharing the photo, Akshay Kumar wrote, "Samrat Prithviraj ki team aaj aa pahunchi and bhagwan Vishwanath Ji ki nagri, Varanasi mein."

In the latest update about the film, the makers changed its title from Prithviraj to Samrat Prithviraj, after facing backlash from Rajput Karni Sena. Responding to the backlash, the production banner Yash Raj Films also penned a letter to Karni Sena, which was obtained by Republic Media Network. The letter read, "'We sincerely appreciate your effort in alerting your grievance in relation to the current title of the film, and assure you that we did not, and not, intend to hurt the sentiments of any person(s) or disrespect the late king and warrior, Prithviraj Chauhan. In fact, we wish to celebrate his bravery, achievements, and contributions to our nation's history, through this film."

The upcoming biopic Samrat Prithviraj is based on Prithviraj Raso, a Braj Bhasha epic poem by 12th-century poet Chand Bardai. The poem follows the life of the mighty king Prithviraj Chauhan. Manushi Chhillar will play the role of Sanyogita, Prithviraj Chauhan's wife. The film will also feature Sanjay Dutt, Sonu Sood, Ashutosh Rana, Sakshi Tanwar, Manav Vij, Lalit Tiwari, and many others taking on some pivotal roles. The film is scheduled to release on June 3.