Sanjay Kapoor shared a short video that saw him and Madhuri Dixit grooving on some of the film's famous numbers. He also penned a note while sharing the memory. 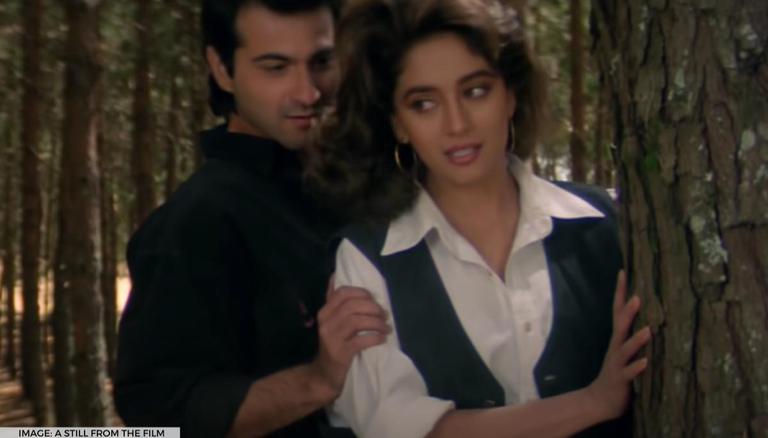 IMAGE: A STILL FROM THE FILM


As one of the highly-acclaimed films Raja clocked 26-years-of its release on June 02, lead actor Sanjay Kapoor took to Instagram to recall some memorable moments spent during the shooting of the film. The actor also shared a short video that saw him and Madhuri Dixit grooving on the songs of some of the film's famous number. On seeing this post, his fans couldn't stop appreciating the video and had some adorable things to say.

Taking to his Instagram handle, Sanjay Kapoor shared a short video of the song Kisi Din Banoongi Main from the film which is truly unmissable. In the video, they can be seen grooving in a beautiful garden. Madhuri is seen donning a silky lavender top, coat and a printed skirt, while Sanjay wore a mango coloured shirt, a brown printed waistcoat and brown pant.

Along with the video, the actor also penned a note revealing details about the film. He wrote, 26 years of Raja #timeflies”. He reminisced his older memories by saying, “We started shooting for Raja with this song in Ooty, Zara Phir se Kehna was the first shot I gave 😍, I cannot thank Madhuri enough for making me so comfortable on set never felt I was working with a super super super STAR ⭐️, Wat a super team we had , @madhuridixitnene #pareshrawal #induirani #ashokthakeria #babaazmi #nadeemshravan #sameer #unforgettablememories”. Take a look at the post below.

As soon as Sanjay shared the post online, fans could not stop flooding the comment section with all things happy and nice. Some of the users went on to congratulate the actor for completing 26 years in the industry, while others simply shared their reactions. One of the users wrote, “All the songs from this movie r my faves wait putting up my most fav right away Sanjay”. Another user wrote, “Are u serious!!! Wow! Time is flying for sure 👏👏👏👏”. Take a look at a few more comments below. 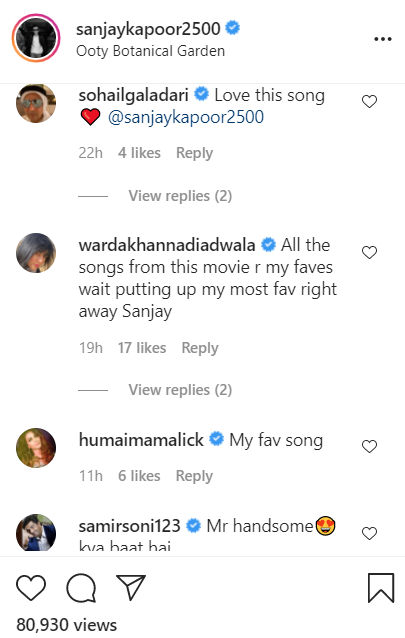 Raja is a 1995 film starring Sanjay Kapoor and Madhuri Dixit in lead roles. The plot centres on Raja and Madhu, who fall in love and decide to marry. Her brothers, on the other hand, oppose their alliance and create a scheme to split them up. The movie went on to garner several accolades for the storyline and acting skills.

READ | Sanjay Kapoor speaks on Shanaya's debut in Bollywood, says she 'wanted it for long time'

Image: A still from the film