Satish Kaushik posted a picture of himself in Udaipur at the Ananta Resorts. He said he was enjoying the winter sun on his face as he left for a shoot.

Satish Kaushik took to Instagram to post a selfie of himself as he was leaving for a shoot. The picture has been clicked at Ananta Resorts Udaipur where the actor/director is shooting for his next project. He has captioned the picture saying that he was enjoying the winter sun at the resort. Noticing which, Amar Upadhyay commented on the picture "wow Satishji" and that the veteran actor looked "amazing". Some of the other comments on the post were people appreciating the candid picture and the aesthetic background.

Also read: Satish Kaushik's Net Worth: Know The Stunning Net Worth Of The 'Scam 1992' Actor 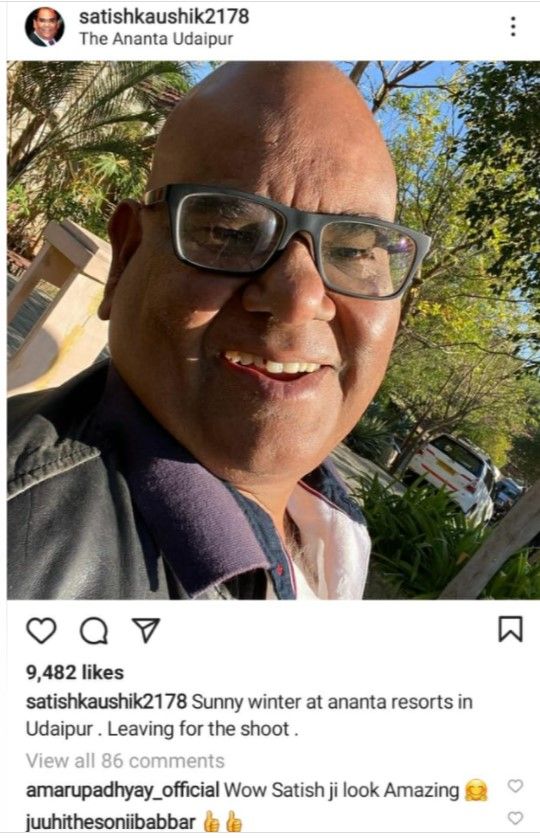 Satish Kaushik in Udaipur for shoot

In the picture, Satish Kaushik can be seen grinning into the camera. He is surrounded by the lush greenery of the resort grounds as the warm rays of the sun shines down on his face. He has his trademark clean-shaven look, from his head to his face. He is wearing thick black matte rimmed glasses that reach the middle of his cheeks. Only the collar of his clothes is visible. He is wearing what looks like a black leather jacket with a collared polo shirt on the inside. His face is the focus of the picture due to the angle of his selfie.

Also read: When Anupam Kher And Satish Kaushik Confessed To Talking Behind Anil Kapoor’s Back; Watch

Satish Kaushik is very active on Instagram and uses the platform to promote a lot of his work. A lot of his profile is dedicated to the promotions of the film Kaagaz where Satish Kaushik starred alongside Pankaj Tripathi. He played the role of Sadhu Ram Kevat in the film, who is a lawyer. In the post promoting his character, he used a dialogue from the movie as a caption. He wrote in the words of Kevat, that if one has a lawyer like Sadhu Ram Kevat, even the dead can come alive then who was Bharat Lal Mutak to contest against him.

The poster with Kevat’s character on it reads, "If you sit on Kevat’s boat then God will help you get across", boasting of the success of Kevat as a lawyer. Kaushik is seen in the traditional black and white attire of a lawyer with thick-rimmed brown glasses and a gap-toothed smile. The film released on January 7, 2021, on the OTT platform ZEE5.