After creating magic on the screen with her sizzling moves in the song 'Dilbar', Nora Fatehi is all set to impress with another song 'Kussu Kussu'. 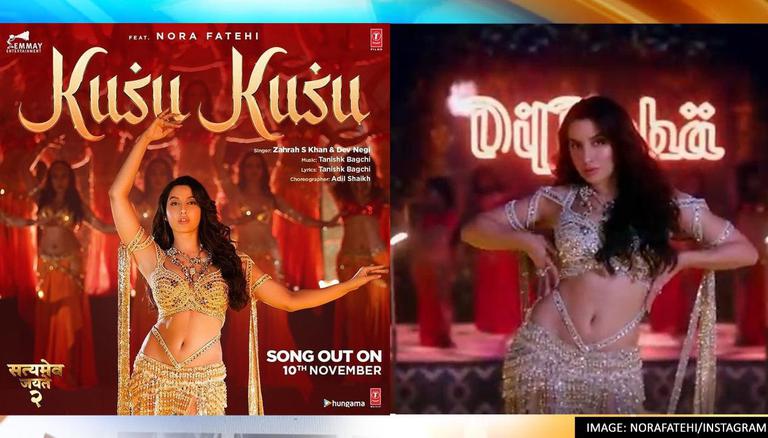 
After creating magic on the screen with her sizzling moves in the song Dilbar, actor Nora Fatehi is all set to impress with another song Kussu Kussu. The dancer-actor is all set to increase the glamour quotient with her new song Kussu Kussu from the upcoming action-drama Satyameva Jayate 2 that stars John Abraham and Divya Khosla Kumar in the lead.

Nora shared a small teaser of the song on her Instagram that has left her fans on toes who are excited to watch the entire song. Along with this, while sharing the video, Nora has announced to release the song tomorrow. Going by the short clip, it seems that Nora is all set to give a double dose of blast to the fans this time too. In the song, she is seen flaunting her belly moves in a shimmery dress. Nora had also performed an item song in the prequel of John Abraham’s film Satyamev Jayate which was released earlier. Satyameva Jayate 2 is directed by Milap Zaveri and is slated to hit the screens on November 25.

Nora Fatehi shares teaser of her next song Kussu Kussu

“Kussukussu out tomorrow. #SatyamevaJayate2 in cinemas on Thursday, 25th November[sic],” wrote Nora along with the song teaser. Earlier, Nora had shared the poster of the song and referenced her special appearance for the song Dilbar in the 2018 film, Satyameva Jayate. She wrote, "After #DILBAR, back again but this time as DILRUBA[sic]." She could be seen in a sizzling gold outfit in the poster and told her fans and followers to 'get ready for a jaw-dropping song'. Kusu Kusu will not be the first song from the film to be released. Meri Zindagi Hai Tu was released last week and gave fans a sneak peek into the romance they can expect on the big screen. The song featured John Abraham and Divya Khosla Kumar’s characters and focused on their undeniable chemistry.

Meanwhile, the film will feature John performing high-octane action and delivering powerful dialogues as he takes on a triple role. Along with John and Divya, the film also features Gautami Kapoor's fleeting glimpses. Coming as a sequel to the 2018 film of the same name, it showcases the fight against injustice and abuse of power. Bankrolled by Nikkhil Advani and Bhushan Kumar, the film has also faced several postponements owing to the COVID pandemic.