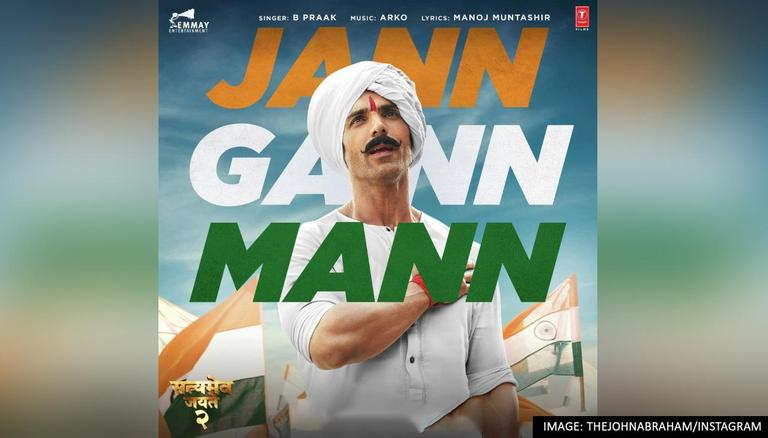 
Makers of John Abraham and Divya Khosla Kumar's upcoming vigilante action film Satyameva Jayate 2 have released its track Jann Gann Mann, which exudes the feeling of patriotism and unrelenting love for one's nation. The track showcases John clad in a white dhoti Kurta and turban as he lip-syncs the song amid the backdrop of people hoisting the Indian flag.

Jann Gann Mann has been crooned by Arko and B Praak, while Manoj Muntashir has penned its lyrics. The track, which has been filmed on Abraham and Gautami Kapoor is all about becoming the sacrificial figure for protecting the nation. Meanwhile, the upcoming thriller drama showcases Abraham as a mighty vigilante, who fights against injustice and misuse of power.

Taking to his Instagram handle on Wednesday, November 17, the Batla House actor uploaded a brief glimpse from the track, noting how one should be willing to give away their lives for their motherland. "#JannGannMann song out now: Link In Bio
#SatyamevaJayate2 in cinemas on Thursday, 25th November", he wrote. Take a look.

The film's tracks like Meri Zindagi Hai Tu, Kusu Kusu and Tenu Lehenga have already become buzzing hits among the audiences. The foot-tapping numbers with groovy beats provide the perfect tracklist for the festive season.

The latest song comes days after the film's second trailer was released, wherein the lead actor could be seen voicing out the unjust practices prevailing in the country. John is taking the cop universe to new heights with his triple role, coupled with high octane action sequences and powerful dialogues. Directed and written by Milap Milan Zaveri, the movie comes as a sequel to the 2018 film of the same name. The film has faced several postponements owing to the COVID-19 pandemic and is now slated for release ‪on Thursday, November 25, 2021.

On the work front, John will be seen alongside Jacqueline Fernandez in Attack. He also has the forthcoming action-thriller Ek Villain Returns alongside Disha Patani, Tara Sutaria and Arjun Kapoor in lead roles. The Mohit Suri directorial is slated for a theatrical release on July 8, 2022.