Shooting for ‘Koffee With Karan’ Season 6 has officially begun. The much-awaited series that is hosted by one of Bollywood’s finest filmmakers Karan Johar is all set to premiere on the silver screen on October 21, 2018.

On Saturday, Karan Johar took to Instagram to confirm that Alia Bhatt and Deepika Padukone will be the season openers. In a post captioned, “Season opener!!!!!!! #girlpowerall the way!!! @deepikapadukone@aliaabhatt ☕️☕️☕️☕️☕️” Karan shared a selfie with the divas.

‘Highway’ actress Alia Bhatt shared a series of pictures from the sets of this show. Sharing the first selfie captioned, “#koffeewithkaran” the 25-year-old looked absolutely flawless.

In the second post captioned, “Cuppa koffee with this beauty 💕 @deepikapadukone”, the duo was seen cooped on the couch.

Cuppa koffee with this beauty 💕 @deepikapadukone

In the third post, the ‘Raazi’ actress was seen striking a pose against a caption on a wall that read, ‘Stop Making Sense’.

Meanwhile, ‘Padmaavat’ actress Deepika Padukone shared a still of herself with Karan Johar. In the post captioned, “😍😍😍 #coffeewithkaran” Deepika is seen kissing Karan on his cheek. 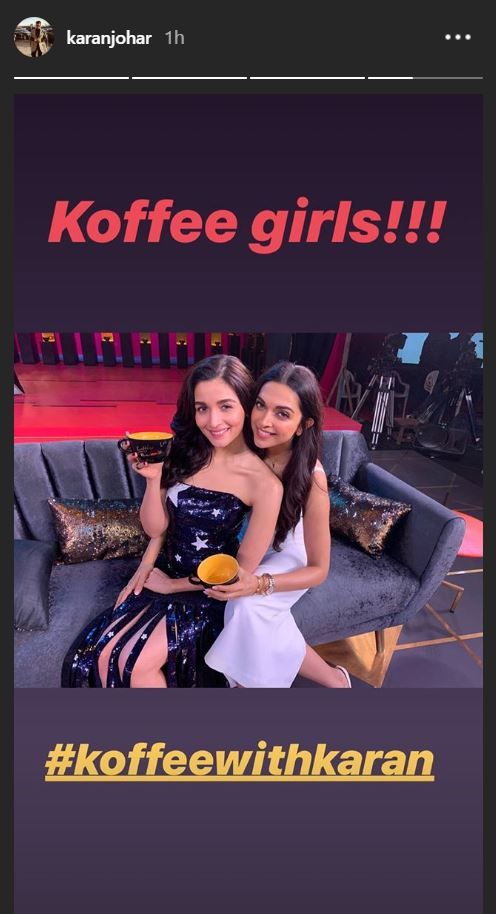 PEOPLE HAVE PLEDGED SO FAR
Maha Cabinet gives nod to make Ajay Devgn's 'Tanhaji' tax-free
Amitabh Bachchan is all set to inspire the audience with his role as Vijay Barse in 'Jhund
Taapsee Pannu's unusual role in 'Haseen Dilruba' is a Hindi tribute to Pulp Fiction
Ayushmann Khurrana's fan sends a heartfelt note, says THIS to the actor
Kareena Kapoor's affordable French designer sweatshirt should be on your shopping list
DO NOT MISS
BJP: 'WE ARE USED TO LAL MIRCHI'
JEFF BEZOS PHONE HACK BY MBS
BJP'S QUESTION ON UDDHAV AYODYHA
KEJRIWAL LAUDS MP GOVT'S SYSTEM
SHIV SENA REFUTES CONGRESS
LIFE INSURANCE FOR NRI IN INDIA