Veteran actor Shabana Azmi shared an amazing picture from her get-together with her film industry friends Anil Kapoor, and Urmila Matondkar on Tuesday 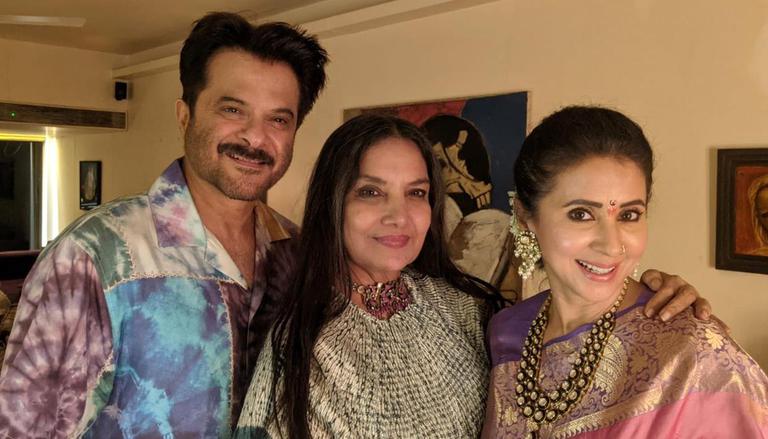 
Veteran actor Shabana Azmi has shared an amazing picture from her get-together with her film industry friends Anil Kapoor, and Urmila Matondkar on Tuesday, October 5.

Taking to Twitter, Shabana posted a picture of her standing in between Anil and Urmila as she posed for the camera. In the picture, she can be seen sporting a grey outfit, while Urmila can be seen in a saree accessorised with heavy jewellery. Anil, on the other hand, wore a multicoloured shirt in the photo.

Sharing the picture, the veteran actor wrote, "With my dear ones Anil Kapoor and Urmila Matondkar. Bahut saara pyar. (lot's of love)"

Fans have also heaped praises on the photos and complimented the veteran actor's outfit. One user wrote, “You know I'm going to borrow that outfit soon,” while another wrote, “That dress is just stunning Shabana Jee."

Meanwhile, Shabana is one of India's highest acclaimed actresses who has been part of multiple acclaimed films over her long career. She has been honoured with five National Awards for her performances in movies Ankur, Godmother, and Arth.

READ | Nikkhil Advani: Shabana Azmi called me and asked me to replace her in ‘The Empire’ series

The veteran actor recently starred in Sheer Qorma, a 2021 Indian short film based on LGBT romance which is written and directed by Faraz Arif Ansari. The film stars Divya Dutta and Swara Bhaskar in the lead role. She will be next seen in Rocky Aur Rani Ki Prem Kahani, which stars Alia Bhatt, Ranveer Singh, Dharmendra and Jaya Bachchan. She will play the role of Alia's mother in the film.