Bollywood actor and model Sherlyn Chopra took to her Twitter handle and shared a tweet in which she accused the filmmaker Sajid Khan of sexual harassment.

Bollywood actor-model Sherlyn Chopra took to her Twitter handle and accused filmmaker Sajid Khan of sexual harassment on Monday. In a brief tweet, Chopra recalled her meeting with Sajid Khan in 2005, after the death of the former's father. As per her tweet, Sajid had asked her 'to feel' his privates.

She further added that while refusing Sajid's demand, she told him that the purpose of her meeting with him was not to feel  him up. Along with the allegations she also shared an article that talked about the Death in Bollywood documentary in which the late Jiah Khan's sister also accuses him. Scroll down to take a look at Sherlyn Chopra's tweet. 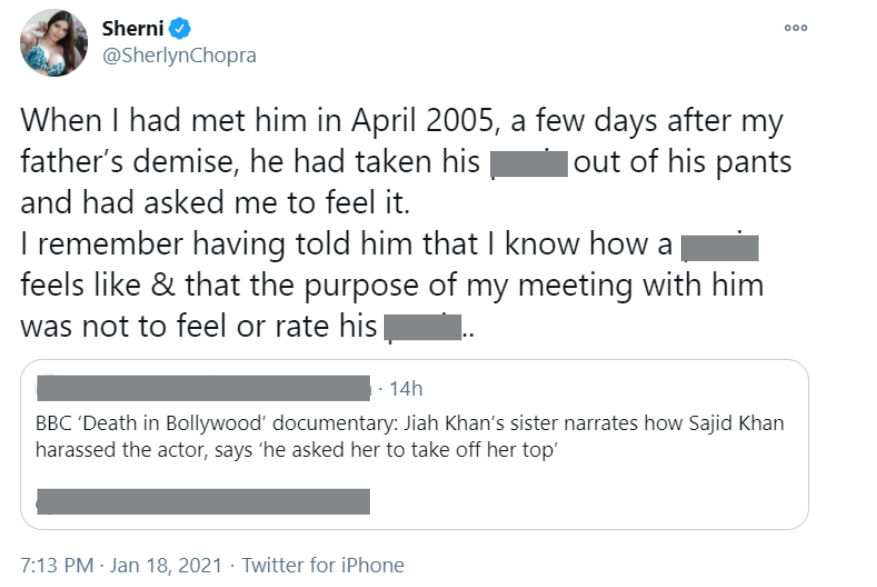 READ | Sajid Khan Opens Up About Working Solo After Wajid's Demise, Talks About His New Projects

The allegation comes a few days after a video of late Bollywood actor Jiah Khan's sister Karishma went viral on the internet. In the video, there's a snippet from the second episode of the documentary where Karishma levelled sexual harassment allegations against filmmaker Sajid Khan. In the clip, Karishma said that it was a rehearsal for Housefull when Jiah was reading the scripts and Sajid asked her to take off her top. Karishma added that Jiah didn't know what to do, and informed Karishma that the filming hadn't even begun yet and that was happening.

Reminder that Sajid Khan is not in jail yet. pic.twitter.com/cZ5I8Rrys0

Jiah worked with Sajid for the multi-starrer comedy Housefull, which also included stars like Akshay Kumar, Deepika Padukone, Ritesh Deshmukh, Arjun Rampal, Lara Dutta, Boman Irani, Randhir Kapoor, Chunky Pandey, and Malaika Arora. In 2018, when 'Me Too' movement was in motion, multiple women had come out to share their experiences against Sajid Khan, following which he stepped down as director of Housefull 4, which released last year. The list included names such as Saloni Chopra and Rachel White, among many others.

READ | Sherlyn Chopra Says 'you Don't Need Drugs If You're High On Life'; Speaks On 'sanskar'