Shilpa Shirodkar got the COVID-19 vaccine in Dubai. She took to Instagram to share her picture post the vaccination with her fans. Read to know more.

Fear gripped people when the lockdown was imposed due to the coronavirus pandemic. People all across the world were waiting for the COVID-19 vaccine to be developed. COVID-19 vaccine from several pharmaceuticals have already been developed and the rollouts of the same have begun. Actor Shilpa Shirodkar is the first Bollywood star to get vaccinated against coronavirus. She received the vaccination in Dubai. She took to Instagram to share the picture of the same. Read ahead to know more.

Bollywood actor Shilpa Shirodkar took to Instagram to inform her fans and followers that she has gotten vaccinated against the novel coronavirus. In the picture, she has shown her arm which is the vaccination site. Shilpa got the COVID-19 vaccine in Dubai as she has been living there. In the caption of the post, she wrote, 'Vaccinated and safe !! The new normal .. here i come 2021 Thank you UAE ðŸ‡¦ðŸ‡ª'. She is also seen wearing a mask in the picture.

Many of her fans have wisher her well by commenting on the post. They are also congratulating Shilpa for getting herself vaccinated. One of her fans also commented that she should update them with the progress and also asked her to stay safe. See their wishes and reactions here: 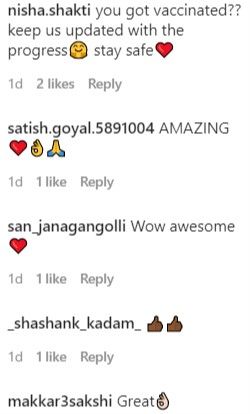 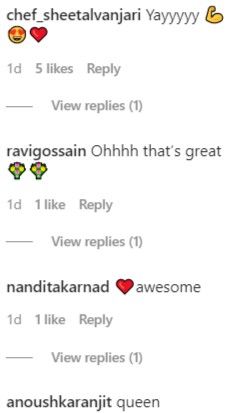 For the unversed, Shilpa Shirodkar is the elder sister of Namrata Shirodkar who won the Miss India pageant in 1993. Bit the siblings entered the entertainment industry together. The former pursued acting in Bollywood and the latter chose to model.

Shilpa Shirodkar made her acting debut with the Ramesh Sippy film Bhrashtachar which starred Mithun Chakraborty and Rekha. She then went on to star in several blockbuster films like Khuda Gawah, Aankhen, Pehchaan, Gopi Kishan, Bewafa Sanam and Mrityudand. She took a 13-year hiatus after her 2000 film Gaja Gamini. She was nominated for the Filmfare Award for Best Actress for her performance in Khuda Gawah. She returned to acting after her long break by starring in the Zee TV serial Ek Mutthi Aasmaan. She was last seen in the movie Guns Of Banaras. The movie is the remake of the 2007 Tamil film Polladhavan.

Also read | Sushant's Face Showed He Was A Good Human Being, Says HC While Hearing His Sisters Plea