Sidharth Malhotra has been giving fans a sneak peek from his lockdown time at home. And his recent working out picture will drive away your lockdown blues.

Sidharth Malhotra has been giving fans a sneak peek from his lockdown time at home. And seems like the actor is making the most of the lockdown as he is at his productive best while at home. The actor recently took to his Instagram handle to share a stunning workout picture of himself and the picture is too hot to miss.

In the picture, one can see Sidharth Malhotra working out as he is lifting weights. The actor also goes on to give a striking pose a vest showing off his biceps. Along with the picture, the actor also wrote telling his fans, “Good things come to those who sweat!”

Seeing this stunning picture, fans were all wooed seeing the actor’s body. They went on to comment on all things nice. One of his fans wrote, “My hottiee.” While the other one wrote, “Handsome.” Check out some more comments below. 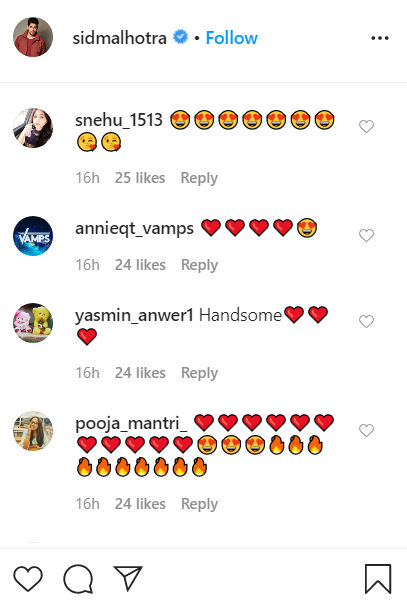 Earlier to this, the actor tried his hand in some delicious meals. He took to his Instagram handle to show fans his attempt on cooking the delicious-looking butter garlic prawns. Check out the video od Sidharth Malhotra cooking and more post from his social media handle.

Also read | Sidharth Malhotra Has A 'quarantine Partner' To Spend His Lockdown With? Details Inside

The actor was last seen in the film Marjaavaan alongside Riteish Deshmukh and Tara Sutaria. The film garnered praise for the acting from fans and movie critics. The actor will next be seen in Vishnuvardhan’s Shershaah. The film is based on Vikram Batra’s Biopic and Sidharth Malhotra will be playing the lead role in the film. The film also stars Kiara Advani and Shataf Figar in pivotal roles. Shershaah is reported to hit the silver screens on July 3, 2020.