Actor Sonam Kapoor who looked regal at younger sister Rhea wedding took to Instagram and shared a bunch of pictures from the intimate ceremony. 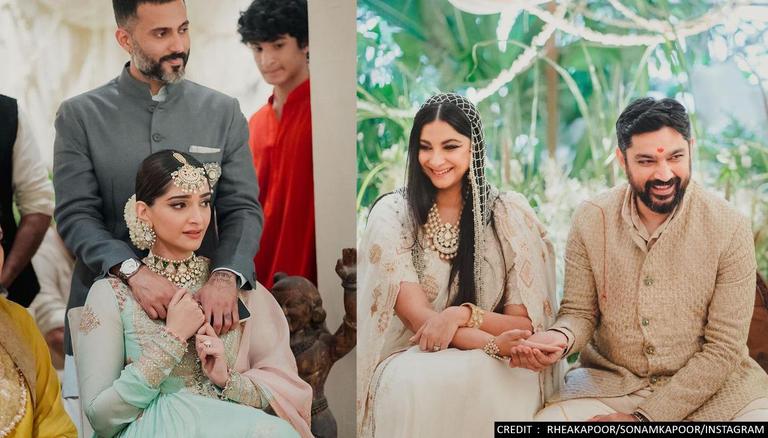 
Actor Sonam Kapoor who looked regal at her younger sister Rhea Kapoor’s wedding took to Instagram and shared a bunch of pictures from the intimate ceremony while penning an emotional note. Sonam is one of the pictures she got emotional and broke down which just depicts her pure and immense love for her. Rhea Kapoor had tied the knot with Karan Boolani on August 14, in a close-knit affair and it was attended by close friends and family.

For Rhea Kapoor's wedding, her sister Sonam made an entry into the venue of her husband Anand Ahuja. For the wedding, she had opted for a pastel blue Anarkali suit with a heavily embroidered neck. Sonam shared the pictures where she showed the outpour of emotions after she saw her little sister about to start a new chapter in her life. While Sonam gets teary-eyed, her husband Anand tries to console her while hugging her. Sharing some random clicks from the wedding, she wrote, “everyday phenomenal,” along with a small heart emoticon.

Apart from this, the Aisha actor also shared a picture with her brother-in-law Karan Boolani while welcoming him into the family. “You’ve always been family. Your friendship is even more important than your title of being my brother-in-law. But I’m so ecstatic that you are! Love you @karanboolani,” she wrote. Announcing her wedding on Instagram, Rhea had later shared, “12 years later, I shouldn’t have been nervous or overwhelmed because you’re my best friend and the best guy ever. But I cried and shook and had stomach flips all the way through because I didn’t know how humbling the experience would be. I’ll always be that girl who had to come home to Juhu at 11 pm before my parents fell asleep. Only until now, I didn’t know how lucky I was to feel torn. I hope we make a family so close that we have many, many loves of our life.”

Karan Boolani and Rhea Kapoor have been dating for almost 13 years. The producer has on numerous occasions professed her love for Boolani on Instagram. The duo's relationship allegedly caught fire after Karan assisted Rhea in filming Aisha, which starred her sister Sonam Kapoor.