Recently, Sonam Kapoor shared a post on her story that explained why she loves her hubby Anand Ahuja's hugs. Read more to see the picture.

She shared a post on her Instagram stories that explained what happens when one hug or cuddles daily. The post showed a graphic of a man and a woman hugging and cuddling. The post said that hugging increases levels of the love hormone oxytocin. It also said that a hug for 20 seconds reduces the effects of stress, blood pressure and heart rate. Talking more about the hugs post explained that a hug for 10 seconds per day helps to boost the immune system. The post further added that it eases depression and reduces fatigue. 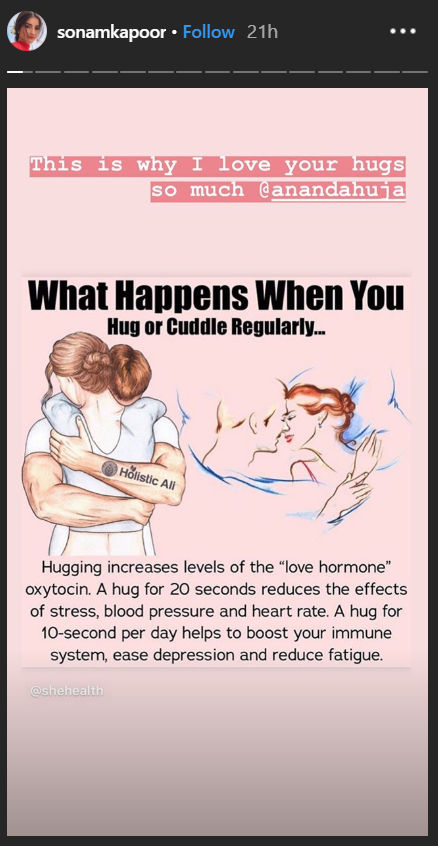 Sonam Kapoor shared this post and captioned it as this is why she loves her husband's hugs so much as she tagged her husband Anand Ahuja in the story. Sonam Kapoor and Anand Ahuja have been posting about each other ever since their relationship came into limelight. Fans also love to see their cute vacation and outing pictures on Instagram.

On the work front, Sonam Kapoor was last seen in The Zoya Factor. The film featured Dulquer Salman and Angad Bedi in pivotal roles. Sonam Kapoor will next be seen in the Hindi remake of a Korean thriller titled Blind, directed by Sujoy Ghosh.

Also Read | Sonam Kapoor Opens Up On Women Empowerment, Says 'we Need To Lift Each Other Up'; See Pics