Sonu Sood visited Delhi CM Arvind Kejriwal in the capital on Thursday. The actor has joined hands with the leader for the 'Desh Ke Mentors' initiative. 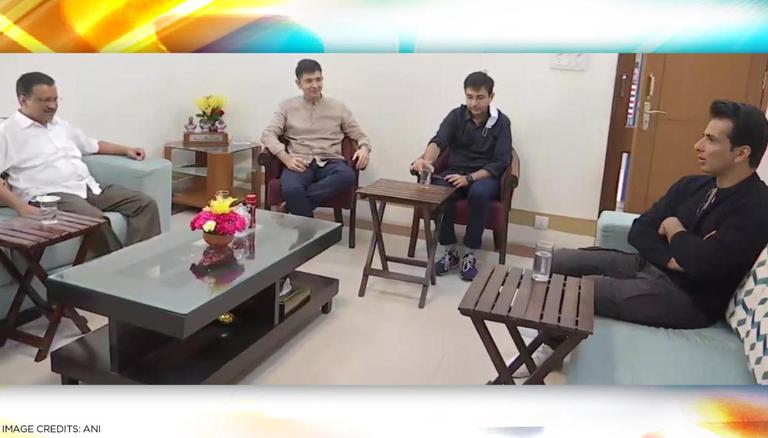 
Sonu Sood has been linked with a venture into politics ever since he made headlines for his philanthropic initiatives during the COVID-19 pandemic last year. While the actor has denied the speculation every time, his meetings with the who's who of the political fraternity have not stopped. The latest politician he met was Delhi Chief Minister Arvind Kejriwal and once again speculation grew, before he was announced as a brand ambassador of the Delhi government's school initiative.

Dressed in a black T-shirt and dark grey trousers, Sonu Sood was seen smilingly talking to CM Arvind Kejriwal in Delhi as the leader listened intently.

"Today, I have been given an opportunity to mentor lakhs of students. There is no greater service than guiding students. I am sure together we can & we will", Sonu Sood said.

Sonu Sood ji has agreed to become the brand ambassador of our 'Desh Ke Mentors' program which will be launched soon: Delhi CM pic.twitter.com/Aa5cxZWrMc

Right from expressing excitement to trolling,  there were different kinds of netizens' reactions on the post. However, notable among them were many believing that the discussions could revolve around the Punjab elections scheduled for 2022. Some asked if the Dabangg star could be a potential chief ministerial candidate or a star campaigner for the Aam Aadmi Party.

Another candidate found for aap for Punjab elections

Branded himself very well. He may be AAP star campaigner in Punjab and may be CM candidate too.

For the unversed, Sonu was born and brought up in Punjab's Moga.

However, later it was revealed that Sonu Sood has been brought on board as the brand ambassador of the 'Desh Ke Mentors' program which will be launched soon by the Delhi government. As the leader praised him for his deeds, Sonu expressed his delight on joining the initiative.

Talking about Sonu, Kejriwal said, "Whoever goes to him for help, he helps them. Whatever governments couldn't, he is doing it. We told Sonu Sood about good things happening in Delhi govt." "We are appealing to people to be a mentor for children studying in government schools," he added.

In response, Sonu said, "I call him visionary because when we talk about education, Delhi is always talked about. Education was an important issue when the lockdown started."

Just a few days ago, the actor had denied any plans to join politics. This was after someone claimed that the Maharashtra Congress was considering him for the position of Mayor for the 2022 elections. He had then stated that he was happy as a 'common man.'

Meanwhile, Sonu has continued his philanthropic initiatives. His latest initiative was providing an oxygen plant in Mangaluru. He has also carried on his initiatives in the education sector, and recently announced a free graduation initiative for engineering, commerce, and science graduates.

Meanwhile, on the professional front, Sonu recently starred opposite Nidhhi Agerwal in the song Saath Kya Nibhaoge. The song was a recreation of  Altaf Raja's song of the name. The music video was directed by Farah Khan, who had directed the 48-year-old in her last film Happy New Year.