Sonu Sood has tweeted asking citizens to send messages with a hashtag- 'UmeedBySonuSood' for anyone who requires help from the viral fever outbreak in UP. 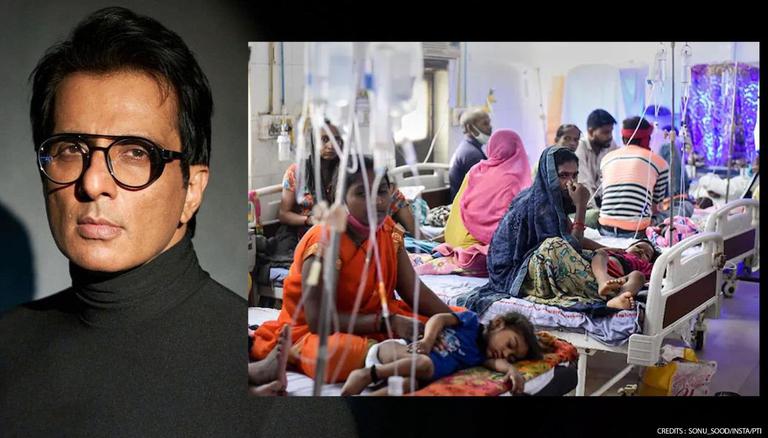 
After providing aid to COVID patients, the education sector, flood-effected areas of Maharashtra and other issues, now actor Sonu Sood has come forward to help children suffering from viral fever in Uttar Pradesh. The actor has tweeted urging citizens to seek help by sending a message with '#UmeedBySonuSood'. As many as 105 patients with dengue fever and viral fever were admitted on Sunday to the government medical college in UP’s Firozabad, where the disease has so far claimed 51 lives.

Three-year-old dies of viral fever in UP

As reported by the PTI, a three-year-old girl succumbed to suspected viral fever in Mathura’s Rahimpur village on Wednesday. Meanwhile, As many as 105 patients with dengue and viral fever were admitted last week to the government medical college in UP’s Firozabad, where the diseases have claimed 51 lives so far. Reportedly, the doctors in Delhi and National Capital Region (NCR) have said that they are witnessing a surge in viral cases amongst children.

"50-55 per cent of patients are complaining about fever. Our institution has been seeing 5-7 dengue cases per day in the OPD. It’s seasonal fever that happens every year," said Dr Jyotsna Madan, Acting Director, Child PGI, Noida.

The Chief Minister ordered strict action against officials of the health and urban development departments, who were found negligent in discharging their duties in Firozabad district where dengue and viral fever claimed over 50 lives. An ICMR team has also reached Firozabad to collect larvae from the affected area, which is causing health complications among children. The 11 member ICMR team was accompanied by the Uttar Pradesh Health Department team and another 18-member medical team investigating the origin of the disease. The deaths in Firozabad have led to the suspension of three doctors.

Some cases have been found in Mathura, Agra and Mainpuri, according to officials. The authorities at the hospital has said that people are displaying different symptoms, and the cause of the disease is still being investigated. "Some have a fever, some have vomiting, others just have abdomen pain. So far, we are seeing that the children have low platelets. We are examining whether it's dengue or something else."