Sonu Sood Reacts To Ranveer Singh's Bold Photoshoot; 'We Live In A World Where....'

In a recent interaction with Pinkvilla, Sonu Sood expressed his opinion on Ranveer Singh’s nude photoshoot which is one of the most trending topics these days. 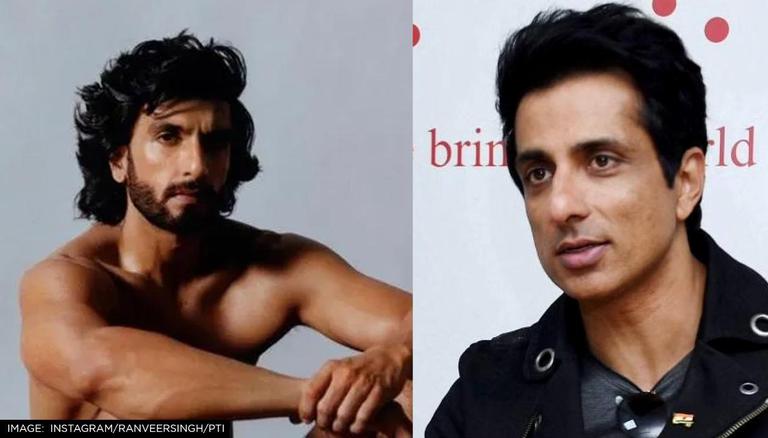 
Bollywood actor Ranveer Singh managed to ruffle a lot of feathers with his latest photoshoot. The 37-year-old actor created quite a stir online after his nude photoshoot for the cover of Paper magazine went viral on the internet. While the photos did not go well with most people, the Gully Boy actor received immense support from his industry colleagues.

Celebrities like Arjun Kapoor, John Abraham, Parineeti Chopra, Alia Bhatt, and many others came out in Ranveer's defence. The latest celebrity to react to the issue is Sonu Sood who recently shared his take on the matter.

In a recent interaction with Pinkvilla, Sonu Sood expressed his opinion on Ranveer Singh’s nude photoshoot. The actor said that it's an 'individual’s choice'. However, he also emphasised the fact that considering the society we live in, such reactions are bound to come. Sonu stated:

"Ya I think it's an individual’s choice to do a photo shoot the way they want. Yes, we live in a world where if you do something there will be a lot of people to point fingers at you but I think when you do that shoot or anything like that then somewhere you get ready that ya such kind of reactions are going to come. So ya if someone is ready then why not?"

Alia Bhatt who has shared screen space with Ranveer Singh in Gully Boy earlier expressed her reaction to her former co-star's photoshoot pictures. At the trailer launch event of her debut production venture Darlings, Bhatt said, "I don’t like anything negative said about my favourite co-star Ranveer Singh. Toh main yeh question ko bardasht bhi nahi kar sakti (So I cannot tolerate this question). I love him. He’s our favourite and he has given us so much in the movies. We should only give him love".

Ranveer Singh on the professional front

On the work front, Ranveer will be next seen alongside Alia Bhatt in Rocky Aur Rani Ki Prem Kahani. The film also stars Dharmendra, Jaya Bachchan and Shabana Azmi in pivotal roles. It will reportedly release sometime in 2023. He also has  Rohit Shetty's comedy-drama film Cirkus, which is slated to release later this year.