Sridevi's daughter Khushi Kapoor, Amitabh Bachchan's grandson Agastya Nanda & Ananya Panday could be together one film, as per their recent appearance. 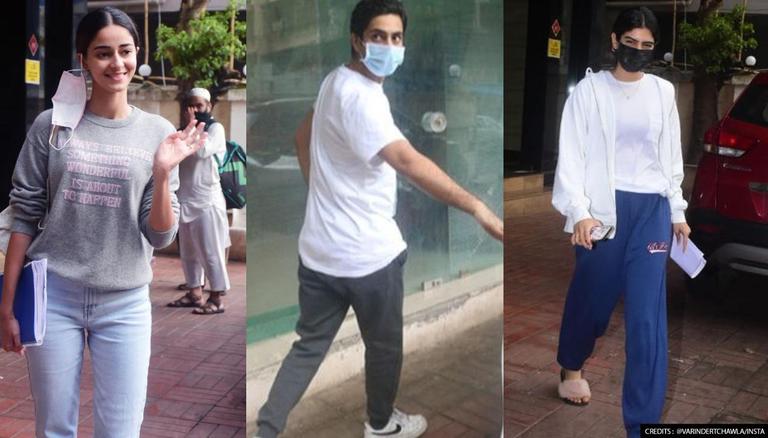 
For decades, kids of film families have been entering the film industry and the trend has continued even now. Many of these launchpads had two-star kids debuting together, be it Ranbir  Kapoor-Sonam Kpaoor, Alia Bhatt-Varun Dhawan or Abhishek Bachchan-Kareena Kapoor.  Now, if reports doing the rounds are anything to go by, late legendary actress Sridevi's daughter Khushi Kapoor and legendary actor Amitabh Bachchan's grandson Agastya Nanda could be making their debut together.

While the buzz surrounding their debuts has been going on for some time, now another star kid, Ananya Panday, seems to have joined. This became a talking point after the trio were clicked at the same venue.

Khushi Kapoor-Agastya Nanda to debut together?

As per reports, Zoya Akhtar is planning to launch Khushi and Agastya in a movie. Amid these reports, the duo was snapped at the filmmakers' office in Mumbai recently. The paparazzi snapped Agastya rushing to the office after arriving in his car while Khushi was seen returning to the car after the meeting at the office.

While the newbies did not pose for the cameras, their senior Ananya did so. The trio was all held with a script-like handbook in their hands, further establishing the fact that their collaboration was on.

Khushi's elder sister Janhvi Kapoor had made her debut with the movie Dhadak in 2018. Since then, she has starred in many films like Roohi, Ghost Stories, Gunjan Saxena: The Kargil Girl, among others. Not just Janhvi, even Khushi is always under the radar of the paparazzi and is regularly snapped whenever they step out for gym or other activities.

Agastya, who is the son of Shweta Bachchan Nanda and entrepreneur Nikhil Nanda, had graduated abroad in 2019. He too is regularly seen at some star-studded parties and was spotted with Ranbir Kapoor, Farah Khan and others in the past.

His sister Navya Naveli Nanda was initially tipped for a Bollywood debut. However, she has stated a few times that she does not wish to join the film industry.

Recently, she had made headlines for her reply to a person who suggested that she tries Bollywood because of her looks. She had replied that 'beautiful women' could also run businesses.