Sunny Deol Takes Friends Out For 'bhutta Treat' In Manali On His 65th Birthday; See Pics

On his 65th birthday, Sunny Deol seemingly ditched a lavish party and took his friends out on a "bhutta treat" during his vacation in Manali. 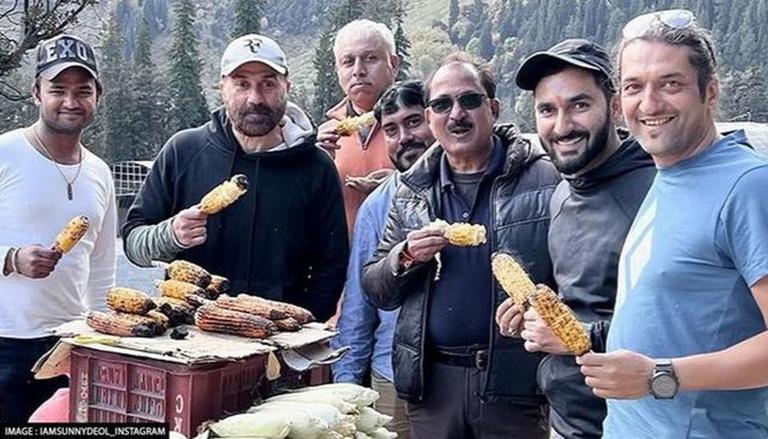 
Sunny Deol is currently vacationing in Himachal's Manali and has been sharing snaps from his trip with his fans via social media. The actor rang in his 65th birthday today, October 19, and has been receiving immense love since midnight. However, seemingly the actor ditched a lavish party and took his friends for a "bhutta treat" in Manali.

Sunny Deol is known for keeping a low profile on social media. However, the actor is keeping his fans updated about his current trip to Himachal Pradesh. In his latest pictures, the actor relished corn with his peers. In another photo, Deol took a bite from his corn while dressed in a black hoodie and grey cap. Sharing the photos, the Apne actor wrote, "Birthday Bhutte Treat with Gang."

His younger brother Bobby Deol sent his love on his birthday as he dropped a series of red heart emojis in the comments section. The actor's fans also sent him warm wishes on his birthday as one of them wrote, "Happy Birthday Sir. lot’s of love and good wishes to u. Hope to c u one Day." A fan also penned, "Happy Birthday Sunny Sir Very Very Happy Returns of the day," while another commented, "Sir we are waiting your next level film gadder 2."

Sunny Deol has been vacationing in Manali, Himachal Pradesh, for a few days now. While the actor will soon star in Gadar 2, fans have speculated that he is filming the movie in Manali. However, much details about the movie's shoot have not been revealed yet.

Ameesha Patel shares a throwback picture with Deol from 2001

Ameesha Patel shared a throwback picture from her and Deol's classic Gadar. In the photo, the two could be seen dressed according to their respective characters on the sets of the movie. Sharing the photo, Patel wrote, "A special throw back picture from the sets of GADAR 1 to wish my TARA SINGH @iamsunnydeol a v v v happppppy badly ..Who knew then that we were working on a film that was going to create cinematic history… and 20 yrs later again be on set for GADAR 2 ….. lots of love always."