Veteran actor Surekha Sikri who passed away after suffering a cardiac arrest last month will come alive in the hearts of her fans after her last film. 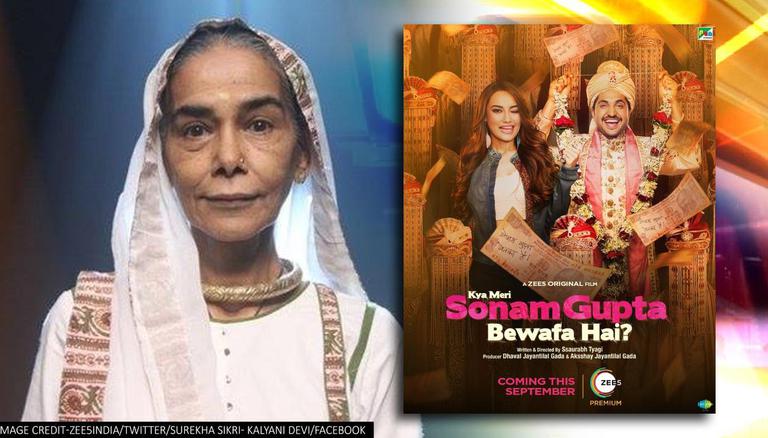 According to a statement by the makers, Kya Meri Sonam Gupta Bewafa Hai is set in a small town in “Uttar Pradesh where a young man Sintoo who falls in love with Sonam Gupta, the town’s heartbeat and a girl way out of his league. The story unfolds when Sonam reciprocates his feelings, leaving Sintoo all the more confused. What follows is a comedy of errors where a line written on a note goes viral and starts a chain of events.” The Ssaurabh Tyagi directorial is presented by Jayantilal Gada of Pen Studios.

Talking about Kya Meri Sonam Gupta Bewafa, Gada said in a statement, “The film’s script is very inspiring and interesting. Taking a viral incident that caught the nation’s attention and making a content-driven contemporary story out of it was something that caught our attention. We at Pen Studios focus on strong content, and this film has it.”

Surekha Sikri started her career in Bollywood in 1978 with Kissa Kursi Ka. Some of her memorable movies include Badhaai Ho, Ek Tha Raja Ek Thi Rani, and Pardes Mein Hai Mera Dil... Indumati Lala Mehra. Surekha Sikri was a three-time National Award-winning actor, who was critically acclaimed for her performances in the theatre. The news about the actor’s demise was shared by Surekha Sikri’s manager in a statement:  "Three-time national award-winning actress, Surekha Sikri has passed away following a cardiac arrest earlier this morning at the age of 75. She had been suffering from complications arising from a second brain stroke. She was surrounded by family and her caregivers," read a statement from her manager. "The family asks for privacy at this time. Om Sai Ram,” it added.