Sussanne Khan Rings In New Year 2022 With Beau Arslan Goni And Ekta Kapoor; Have A Look

Sussanne Khan and Arslan Goni are good friends of Producer Ekta Kapoor, and they are often seen partying together. 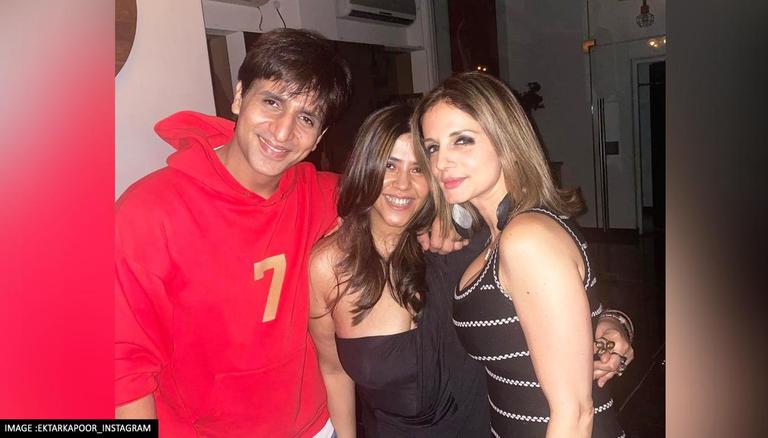 
Sussanne Khan and Arslan Goni's rumoured romance has already created a buzz on social media as the two are often spotted together. Their picture also surfaced online on multiple occasions. Most recently, it was Arslan's 'Love you' comment on Sussanne's birthday post for him that added fuel to their dating rumours. A few days back, they were seen together at Ekta Kapoor's Christmas bash together and now taking to her Instagram handle producer Ekta Kapoor shared a glimpse of her New year party celebration with Sussanne and Arslan Goni.

Sussanne Khan and Arslan Goni are good friends of Producer Ekta Kapoor and they are often seen partying together. Dressed in party attires, Ekta Kapoor captioned the post as "Happie new year! This year took a lot I always had n gave me Wat I never did! N like it’s said in matrix …in between fear n desire, we let our lives go! Wanting Wat, we don’t have n fearing we will@loose Wat we do!".

Taking about the difficult times that Sussane had to go through, she further wrote- "So I wanna begin with thanking 2021 for testing my patience so much that it made me even impatient me learn patience! Hoping 2022 will b better but not expecting anything! 2021 taught us another thing d hope we had when it began came crashing with d loss n lockdown! So let’s begin 2022 with undesirous patience n wit to handle it without expectations"

Sussanne Khana and Arslan Goni are rumoured to be dating for some time now as Sussanne Khan almost made their relationship official in her recent loved-up birthday post for Arslan Goni. Arslan Goni is TV actor Aly Goni's elder brother, who is also an actor by profession. He last featured in the show Mai Hero Boll Raha Hu, alongside Parth Samthaan, Patralekhaa, and Danish Hussain. The show was produced by Ekta Kapoor and streamed on Zee5 and ALT Balaji.