Sweta Basu Prasad has shared the trailer of her upcoming film 'Jamun'; Have a look at what she had to say along with her fans' reaction to the trailer

Sweta Basu Prasad has been seen working in a number of film projects in the past few years. Her acting skills have started to get recognition across the film industry, owing to the various types of roles that she has played on screen. However, one of her films that she had worked in a few years ago, is headed for release this year, after a long wait. The actor has shared the trailer of the film along with a long and heartfelt message on social media. Have a look at the trailer of Jamun.

The trailer of the film shows a brief look and story of the film, with Sweta evidently playing a shy yet responsible character. The plot of the film follows the story of an Indian father who is desperate to ensure that his daughter gets married and it focuses on some of the ignorant practices and mindset in the Indian society with regards to women. The film portrays a sharp reflection of a middle class family in the country and the various obstacles they have to overcome in different walks of life.

ALSO READ: 'Comedy Couple' Cast List: All You Need To Know About The Actors And Characters

Even though the trailer starts off on a light-hearted note, it soon reveals that it has some serious scenes with intense acting as well. The story of the film also brings a strong twist in its plot, that likely puts the mirror back on some of the negative mindset in Indian families. Sweta Basu Prasad shared a long message in the caption of her post along with a trailer as well. She started off by revealing that the film was shot way back in 2018. She further said a few words of motivation for women, telling them that they were “enough”, while taking a dig at “ignorant society’s set standards of beauty”. 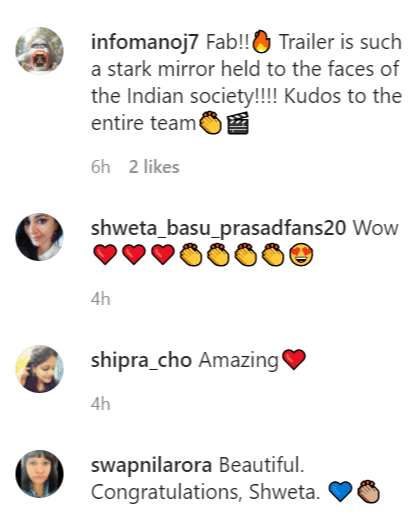 ALSO READ: Shweta Basu Prasad Is All Smiles After Her Separation From Husband; See Pics

Fans reacted strongly to the trailer shared by Sweta in the comments section of her post. Many of them congratulated her for working in this movie, praising the portrayal of some of the negative mindset in the society regarding women. The film will release on January 21.