Akshay Kumar & Taapsee Pannu, Dia Mirza, among other Bollywood celebrities have taken to social media in order to raise awareness about social issues 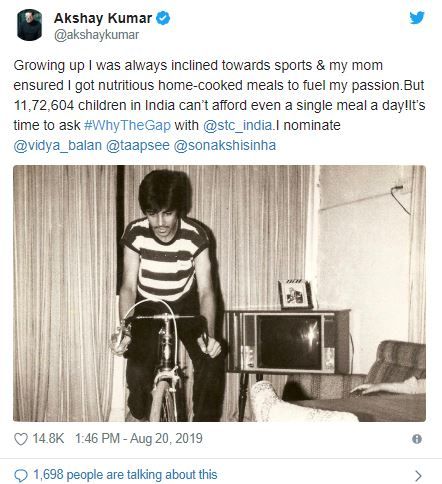 Sharing a picture from her teenage years, 'Mrs. Funny Bones' adding humour to her post shared that she had the same hairstyle as her teacher. She then went on to demand that every girl be empowered with the right to education.

I have the same hairstyle as my teacher!Academics helped in making me an independent woman.2/5 girls still don’t complete school.Let’s ask #WhyTheGap with @stc_india to give every girl #TheRightStart -I nominate @sonamakapoor @tahira_k @akshaykumar to share their school memories pic.twitter.com/JJNAlZWIEI

Dia Mirza posted a tweet addressing the millions of children who are still living on the streets and don't have a roof over their head. She then went on to nominate Faye Dzousa, Shabana Azmi and Alia Bhatt for the challenge.

While I had the privilege of living under a roof comfortably, 2 million children still live on the streets. I nominate @fayedsouza @aliaa08 @AzmiShabana to ask #WhyTheGap with @stc_india. pic.twitter.com/Bl4uRSzOa4

Taapsee Pannu shared a picture of her winning a school sports event. Stating that Sports has been an integral part of her life, she wrote," School race tracks became my war zone every year and thanks to a supportive family and encouraging school teachers I could have my moment of glory. Unfortunately, many kids don’t have that support system.

Sports have been an integral part of my life. School race tracks became my war zone every year and thanks to a supportive family and encouraging school teachers I could have my moment of glory. Unfortunately many kids don’t have that support system #WhyTheGap@stc_india pic.twitter.com/PVUMLrnUX7

Akshay Kumar and Taapsee Pannu were seen sharing screen space in the film, 'Mission Mangal'. The film is currently doing amazingly well at the box office. In just a matter of five days, the film crossed Rs 100 crore at the box office.

Dia Mirza and Twinkle Khanna, on the other hand, have stayed away from the limelight for quite a while now. However, Mirza is known across the country for her humanitarian work, while Khanna is an established author popularly known as 'Mrs. Funnybones.'