Taapsee Pannu Refuses To Be Baited By Rangoli Chandel's Jibe, Here's What She Said

Bollywood actress Taapsee Pannu has finally reacted to Kangana Ranaut's sister Rangoli Chandel's remark. A few days back, Chandel had called Taapsee a 'sasti copy' of Kangana Ranaut, when the latter has posted a tweet expressing her excitement over the trailer of 'Judgementall Hai Kya'. Kuch log Kangana ko copy kar ke he apni dukaan chalate hain, magar pls note, they never acknowledge her not even a mention of her name in praising the trailer, last I heard Taapsee ji said Kangana needs a double filter and Tapsee ji you need to stop being a sasti copy", she had tweeted.

Reacting to the same, Taapsee stated that she has a 'short life, and she has no time to waste on this'. The actress further went on to say that a lot of 'happier and better things' are happening in her life right now, and she would like to concentrate on that.

Not just Taapsee, but Rangoli also hit out at Varun Dhawan for not crediting Kangana Ranaut when he tweeted about 'Judgementall Hai Kya' trailer. 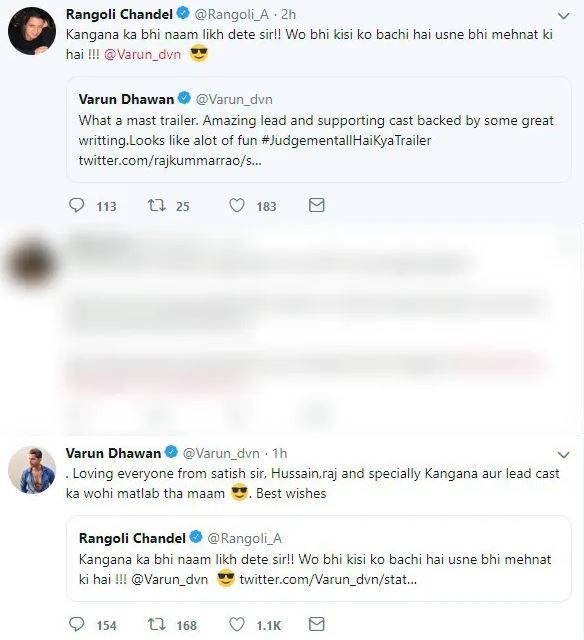 Prior to this, Kangana Ranaut was asked to respond to the entire debacle, who said that Rangoli is defending her, just like Kashyap is supporting Taapsee. She went on to say that her sister was just 'lovingly teasing' Varun Dhawan as he never responded to her when she asked him to speak about 'Manikarnika' and that Chandel is really upset by Taapsee saying that, Ranaut needs a 'filter'. Concluding she said that if anyone has a problem with Rangoli's tweets should just unfollow her.

READ: ‘This Is Going Too Far’: Anurag Kashyap Hits Back At Kangana Ranaut’s Sister Rangoli Chandel After She Attacks Taapsee Pannu

Meanwhile, speaking about the film, it was initially titled "Mental Hai Kya" and was at the receiving end with many people calling the title derogatory and insensitive to mentally-challenged persons. embers of the Indian Psychiatric Society (IPS) had written a letter to the Central Board of Film Certification (CBFC) seeking a change in the title, stating that they find it derogatory and demeaning to the mentally ill.