Tamannaah Bhatia On Celebs Announcing Acts Of Charity: 'I Don't Like Talking About It'

Tamannaah Bhatia, in an interview with a publication, stated that there was pressure on celebs announcing acts of charity. She didn't like talking about it. 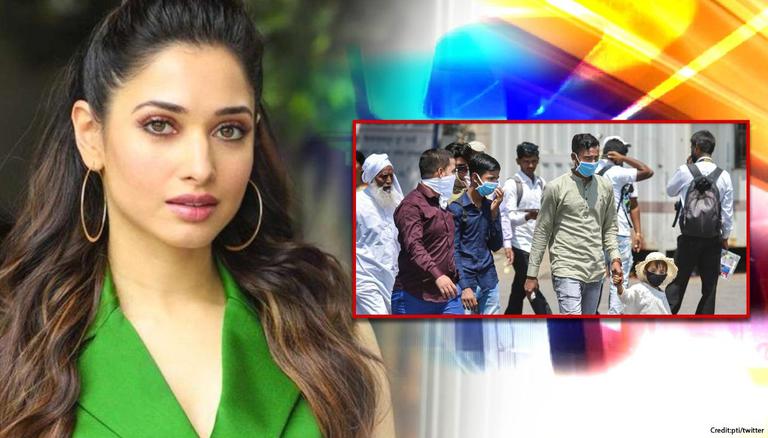 
Celebrities of the film industry have been doing their bit in providing help in various ways amid the second wave of COVID-19. Right from sharing posts of requirements of medicines, hospital beds, plasma, and oxygen supply equipment to going out of their way in arranging it themselves for the needy, many stars have been making headlines for their efforts. Amid this talk, Tamannaah Bhatia shared that she did not believe in showcasing to the world her acts of charity.

Tamaannaah shared, in an interview with Hindustan Times, wondered why there was unnecessary pressure on celebrities to display their acts help during the ongoing pandemic, amid criticism from a section on them not doing enough. The actor shared that it was more of ‘to each his own’ as different people have different notions on announcing their deeds of kindness. She shared that she did not like talking about helping someone.

Tamannaah said that there were, however, people who believed that displaying it was a way of spreading the message.

The Baahubali star stated that she came from a different school of thought and asked why should she be showcasing it to the world. Questioning the ‘pressure’ on celebrities to always talk about, she stated that she could not connect to the idea in that manner.

Tamannaah also questioned about some people having a wrong impression about actors having a lot of money and privileges. She shared that actors were 'like everyone else', and that no one had given all this to them. The 31-year-old stated that people had expectations from them as they often confused their on-screen image to what they were as people, so had these expectations.

READ | 'November Story' review: What is the verdict for this Tamannaah starrer web series?

Meanwhile, on the professional front, Tamannaah had multiple releases recently. This includes web series like 11th Hour and November Story. Her  film Bole Chudiyaan opposite Nawazuddin Siddiqui is up for release, while she is working on movies like Bole Chudiyan

READ | Tamannaah Bhatia opens up on future of films: 'Everything boils down to good content'