Three days after Bollywood actress Tanushree Dutta registered an official FIR against veteran actor Nana Patekar, Ganesh Acharya, Samee Siddhiqui and Rakesh Sarang under IPC sections 354 and 509 at the Oshiwara police station in Mumbai, the actress on Saturday has demanded for Narco analysis, lie detector test and brain mapping test against the four accused in the case.

Republic TV has got an exclusive access to Tanushree Dutta’s application for the Narco Analysis in which she has stated that the accused Nana Patekar, Ganesh Acharya, Samee Siddhiqui and Rakesh Sarang are highly influential people and they can use coercion to put the witnesses under pressure.

“My client states that the accused are highly influential and high profile person, and also has good political connections, therefore every possibility is there to put under pressure, fear, coercion and influence to the witnesses,” reads Dutta’s application.

Furthermore, in her application, Tanushree Dutta has requested the police to arrest the four accused celebrities claiming that they can mislead the investigation by producing false witnesses against her. She has further demanded to resort to the use of Narco Analysis, Brain Mapping and Lie Detector Test on the accused Nana Patekar, Ganesh Acharya, Samee Siddhiqui and Rakesh Sarang

“Accused are denying the charges levelled against them before media and they can put the witnesses under pressure or the accused may present bogus witness to record negative statement against the complainant, therefore, fair investigation has to be carried. It has become necessary to arrest accused and conduct Narco Analysis, Brain Mapping and Lie Detector Test to ascertain their role in the said offences. Without arrest, tests will not be possible to get just to the complainant,” she further stated in the application.

Have a read at Tanushree Dutta's application here: 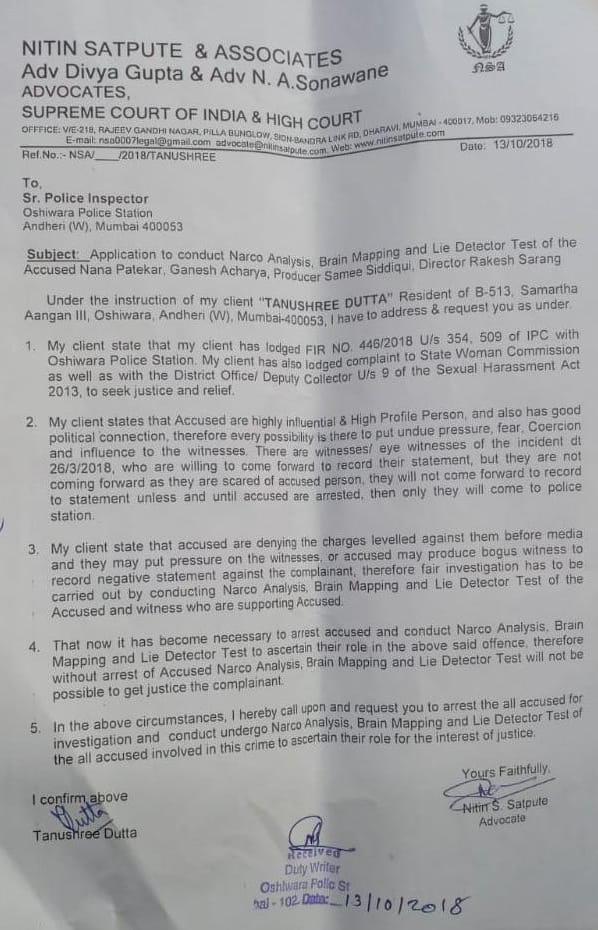 Tanushree Dutta recorded her statement on Wednesday, October 10. In her statement, Dutta recalled the incident and said, "On the 4th day of the shoot, 26th March 2008, in between the shots was going on the set there were around 100 supporting staff including junior artists, dancers and others were present on the set and Nana Patekar against my will and consent started grabbing me by the arms and pushing me around on the pretext of teaching me how to dance even though he is not the choreographer when he was touching indecently and unnecessary in front of everybody but nobody objected and all were complicit in this behaviour by being silent spectators. I felt very uncomfortable because of his behaviour mentioned above and he has outraged my modesty I felt embarrassed like this his behaviour was inappropriate towards me."

READ: #MeToo: 'This Behaviour Was Not Natural And I Did Not Feel Comfortable About It,' Says Tanushree Dutta In Her Statement Against Nana Patekar