A few hours ago, Tara Sutaria shared an adorable boomerang video on Instagram stories. Here she can be seen cuddling and kissing his nose. Watch the video.

Amid lockdown, Tara Sutaria got home a five-month-old Beagle. A few hours ago, she took to her social media to share an adorable boomerang of her dog, Bailey. In this IG story, the actor can be seen cuddling and playing with her pet and giving it nose kisses. Tara Sutaria also penned a cutesy note on the story, "Nosey nosey and kisses kinda evening" with a dog sticker attached to it. Take a look - 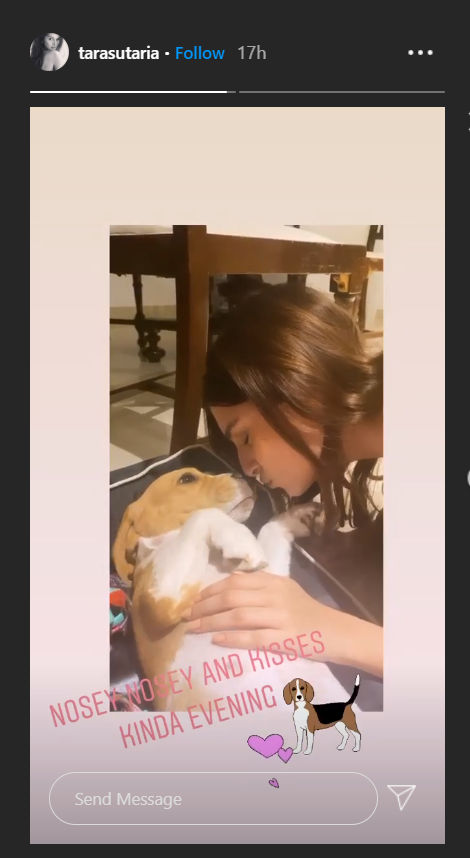 It was only a month back when Tara Sutaria welcomed Bailey in her house. She shared photos on social media and introduced the new member of her family to her fans on Instagram.  The little pet is apparently named by Tara's rumoured boyfriend Aadar Jain as she acknowledged it in response to his comments for the post. She captioned the picture as "Welcome home, Baby Bailey!!! ðŸ¶ðŸ¤ðŸ•âœ¨ @aadarjain @piasutaria ðŸ–¤ðŸ–¤ðŸ–¤ðŸ–¤". Check out the post here.

Meanwhile, recently Tara Sutaria's deleted monologue video from her debut Student Of The Year 2 went viral on social media. The video shared was shared by one of her Instagram fan clubs. In the video, she can be seen delivering the dialogue effortlessly. She says, "Omelet se leke Hamlet tak, Pendrive se leke Long drive tak, Pasta se leke insta tak, life ne hamare saath bohot kuch share kiya hai". In the background, someone can also be heard complimenting Tara and lauding her as the 'monologue queen' as she delivers the dialogue. Take a look at Tara's unseen video as she says her deleted monologue.

What's next for Tara Sutaria?

On the professional front, Tara was last seen sharing screen space with Sidharth Malhotra, Rakul Preet Singh, and Riteish Deshmukh in Marjaavaan. The action drama film was released last year. In this film, she portrayed the role of a mute girl.

For her next, she has been roped in for Tadap. The movie is a romantic action thriller that will be directed by Milan Luthria and produced by Sajid Nadiadwala. It is a Bollywood remake of 2018's Telugu film RX 100. Tadap will also mark the Bollywood debut of Suniel Shetty's son, Ahan Shetty.

The Suite Life of Karan & Kabir actor also recently joined the Ek Villain 2's cast along with John Abraham and Disha Patani. It is helmed by Mohit Suri. However, nothing has been officially confirmed yet.