Kangana Ranaut took to her Instagram handle and treated her fans and followers with a series of pictures from the wrap-up party of her forthcoming film, Tejas 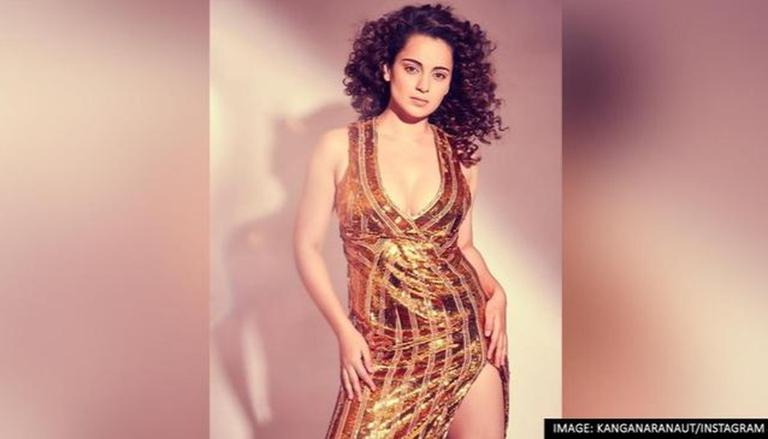 
Recently, Queen actor Kangana Ranaut took to her official Instagram handle and treated her fans and followers with a series of pictures from the wrap-up party of her forthcoming film, Tejas. The film that went on floors in the month of December last year recently finished shooting. The cast and crew celebrated the moment by holding a special wrap-up party. Scroll down to see the pictures.

Taking to the photo-sharing site, Kangana Ranaut posted a series of pictures where she can be seen donning a sizzling shimmery gold dress with a deep v-neck and a slit. She went for subtle makeup and kept her curly tresses hanging. As for the caption, she wrote, "Tejas wrap party.. By our lovely producers @rsvpmovies..."

The Panga actor uploaded yet another picture where she can be seen posing confidently for the camera. Sharing the same, she wrote, "I always run out of words while forming these captions… Suggestions please… " For the third picture, she captioned, "There is a song ringing in my head… Mere mehboob tujhe meri mohabbat ki kasam…" Many fans and followers rushed to compliment the actor. Several of them dropped red hearts, heart-eyed face and fire emoticons.

Backed by RSVP movies, the film will see Kangana portraying the role of an Indian Air Force pilot. Helmed by Sarvesh Mewara, the film takes inspiration from India's first Air Force that inducted women into combat roles in the year 2016. In a statement, Ronnie Screwvala had clarified that the film is not a sequel to URI: The Surgical Strike.

The cast and crew began shooting the film in the end of 2020. Kangana updated her fans and followers regarding the same on her verified Twitter handle. She wrote, "#Tejas to take-off this December! Proud to be part of this exhilarating story that is an ode to our brave airforce pilots! Jai Hind Flag of India #FridaysWithRSVP."

Kangana’s first look from Tejas was unveiled on her birthday in the month of March. The actor has been treating her fans from her behind-the-scenes where she can be seen training fiercely.

READ | Who is Avneet Kaur? Here's all about the lead of Kangana Ranaut's 'Tiku Weds Sheru'