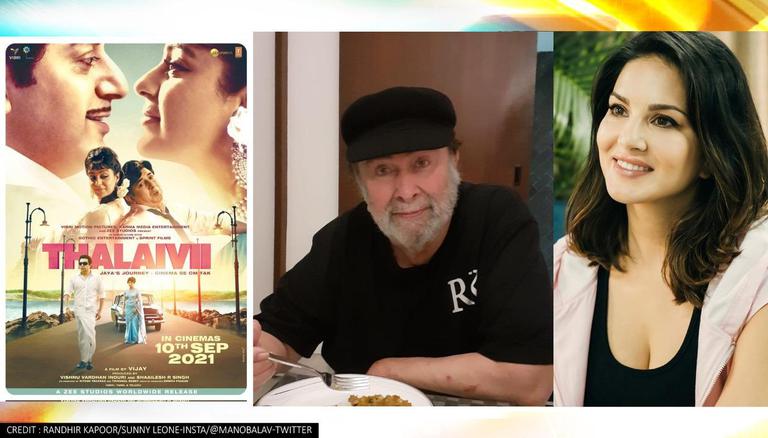 After announcing the new date of the theatrical release, the filmmakers of Thalaivii have shared the teaser of the film's first romantic song titled Teri Aankhon Mein on Monday. The makers of the Kangana Ranaut starrer biopic have also announced the song will be releasing on Monday, August 30. The short video of Teri Aankhon Mein gives glimpses of a beautiful portrayal of Jayalalithaa and MGR's on-screen romance. Watch the video below.

Veteran actor Randhir Kapoor who lost his two popular brothers, Rishi, and Rajiv within a year at an early age, has the actor completely shattered. Randhir, who lost ‘two of his pillars’ in a year, recently opened up about his last conversation with Rajiv before his death. Randhir said that they last spoke the night before his death, and the actor was drinking in his room.

Riya Sen Heartbroken Over Afghanistan Crisis; Says 'my Heart Goes Out To Them'

The ongoing crisis in Afghanistan amid the Taliban takeover has sent shockwaves across the world and Indians also have been following the situation and expressing their concerns on social media. Leading names from the film industry shared their views and worries regarding the situation. As shocking visuals emerge from the nation day by day, the most recent being that of blasts at the Kabul airport, Riya Sen was the latest who stated that her heart went out to those battling the situation.

READ | 'Thalaivii' makers to organise a 'grand event' in Chennai prior to release; Know why

Aparshakti Khurana and his wife, Aakriti Ahuja, recently welcomed their first child. The couple was blessed with a baby girl earlier today, who they named Arzoie A Khurana. Here is how Arzoie's uncle and aunt, Ayushmann Khurrana and Tahira Kashyap shared their excitement on her arrival.