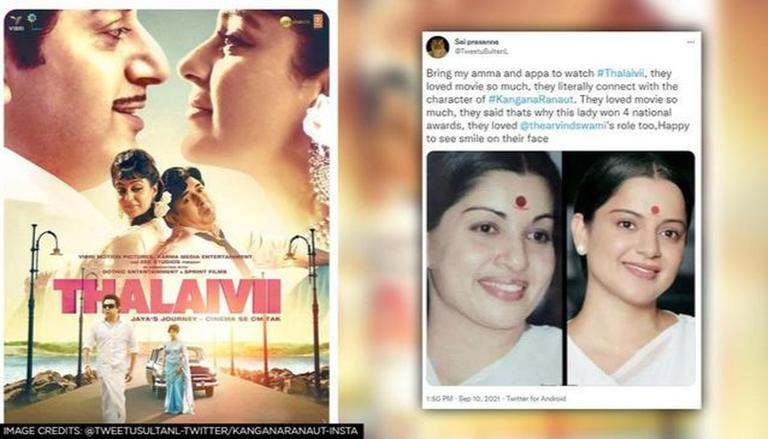 
Kangana Ranaut never ceases to amaze the audience with her astounding roles and has proved her mettle yet again with her portrayal of the former Chief Minister of Tamil Nadu and actor J. Jayalalithaa in Thalaivii. The biographical movie finally hit theatres on Friday, 10 September 2021, after a long-running feud between the makers and multiplex chains, and the reviews couldn't have been better. The film traces the life of the famous personality from her debut in the film industry to entering public life through politics.

Apart from Kangana, audiences have been loving Arvind Swamy's role as the fan-favourite M. G. Ramachandran (MGR), with whom Jayalalithaa made her movie debut at the age of 16. Several netizens took to their social media handles hailing the movie as a 'winner' and a 'masterpiece'. Makers are also being appreciated for providing a wholesome cinematic experience.

The movie, which was released in theatres today in Tamil, Telugu and Hindi has been deemed as a full-on mass entertainer, with netizens calling the director A. L. Vijay's vision 'top-notch'. People hailed Kangana, adding that she deserves another national award for the role. Take a look at the fan reviews.

Taking to their Twitter handle, one user wrote, "Bring my amma and appa to watch #Thalaivii, they loved movie so much, they literally connect with the character of #KanganaRanaut. They loved movie so much, they said that's why this lady won 4 national awards, they loved @thearvindswami 's role too. Happy to see smile on their face,", while another mentioned how the second half of the movie stuns the viewers. Performance of the actors, screenplay, and direction of AL Vijay is top notch. Second half of the film makes you stand in a seat and whistle. Special mention to@neeta_lulla, great job done by you", they wrote. Others also reiterated their connection with the movie.

READ | Kangana Ranaut on playing 'most iconic women' in Thalaivii: 'Had passion for Jaya amma'

#KanganaRanaut’s #Thalaivii is a winner.
Performance of the actors, screenplay, and direction of AL Vijay is top notch.
Second half of the film makes you stand in a seat and whistle.
Special mention to @neeta_lulla, great job done by you
Rating:⭐️⭐️⭐️⭐️🌟 pic.twitter.com/x7YLybg692

#Thalaivii A sincere attempt from the director. Both lead actors #Thalaivii and #ArvindSwami nailed it. ⭐⭐⭐⭐ Repeat worth!

Finally watched this masterpiece 🎊
Can't get enough of it..
Our #Thalaivii As usual nailed every scene ⚡#KanganaRanaut pic.twitter.com/pVplKNSPX6

Meanwhile, Thalaivii was screened in Delhi recently for the members of the Parliament. The actor took to her Instagram as she posed with the Minister of Women and Child Development Smriti Irani, hailing her as the real-life 'Thaliavii'. The film also stars Madhoo Shah, Bhagyashree, Raj Arjun, Jisshu Sengupta and others. The multilingual biographical film is helmed by AL Vijay and produced by Shaailesh R Singh and Vishnu Vardhan Induri. It has been in headlines lately owing to large multiplex chains refusing to screen the Hindi version.